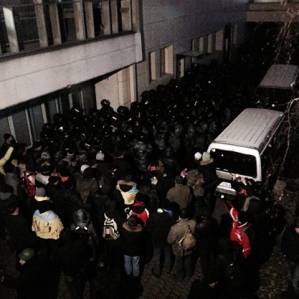 On Dec 6, well-known Road Control [Dorozhny Kontrol] journalist Amdriy Dzyndzya was remanded in custody for 2 months.  He is accused of involvement in the disturbances near the president’s administration on Bankova St during the huge pro-Europe demonstration on Dec 1.   He becomes the latest of at least 10 people, including one other journalist, Valery Garaguts,  whose detention over alleged connection with an almost certainly orchestrated confrontation raises very serious concerns.

Road Control, a civic watchdog monitoring the work of the traffic police, stresses that Dzyndzya was filming the protests on Bankova St in his journalist capacity and did not do anything against the law.

The suspicious nature of this latest detention order could not be more overt.  Dzyndzya was detained on Thursday together with two MPs’ assistants.  One of the latter was later released, while Dzyndzya and Serhiy Khadzynov were taken to the Department for Fighting Organized Crime [UBOL] on Gorky St.   The police refused to allow lawyers (or MPs) in to see the men, which is a flagrant violation of their constitutional rights.    Following the excessive violence used by Berkut riot police against peaceful protesters on Nov 30 and Dec 1, distrust in the law enforcement bodies is at an all-time high and by 22.00 rumours were rife that the police were hiding the detained men because they had been badly beaten.  A large number of EuroMaidan protesters went to the building and a stand-off continued well into the night between protesters and Berkut riot police.

While those fears may have been groundless, the court hearing on Friday only fuelled suspicion about the criminal proceedings against the Road Control journalist.   When Dzyndzya’s lawyer, Viktor Smaliy demanded in court that his client, in accordance with the law, be handed the application for his remand in custody, it transpired that there was none.  This came after the prosecutor had told the court that he supported the investigator’s application for the 2-month detention order.  Judge Volodymyr Buhil was unperturbed by the procedural infringement and began simply reading out the application for a detention order, and when Smaliy demanded that his client receive the application in writing, ordered him out of the courtroom.  The lawyer refused to go, at which point the judge announced a break and left, clearly assuming that the court bailiffs would eject Smoly.  MPs present stood up to defend him. The Liga news report broke off at this impasse however what is known is that Buhil allowed the application and ordered Dzyndzya’s arrest for 2 months.

No evidence was provided and in this the case is disturbingly similar to those of the first 9 “Bankova prisoners” who have also been detained for 2 months without any proof of involvement in the Dec 1 disturbances on Bankova St.  Those 9 arrests, reported here, prompted an Amnesty International urgent action on Dec. 6 in which the organization states that the men “may have been arbitrarily detained, and their arrest was approved by judges in flawed court proceedings”.

Seven of the nine are presently hospitalized, and there is video footage in which many of them can actually be seen being beaten by Berkut riot police while lying on the ground showing no resistance.  There is no evidence at all that even one of them was involved in the actual confrontation which is widely believed, with cause, to have been orchestrated.

This is not the first time that Andriy Dzyndzya is facing very dubious criminal proceedings. Just over a year ago, he and another journalist, Andriy Zhukovyen, reported having been set upon by a group of thugs whom Road Control was convinced had been brought in by the traffic police whose illegal car impoundment area had come under scrutiny.  Three months later, in February 2013 dodgy criminal charges were brought against both men.   Andriy Zhukovyen learned of this while in the USA and applied for political asylum.  This was granted just last month.

President Viktor Yanukovych’s refusal to sign even a compromise document at the Vilnius Summit and rejection of EU integration prompted the ongoing mass protests throughout Ukraine.  Yanukovych made much of the economic pressure the country was under from Russia. He had, however, stubbornly demonstrated unwillingness to release his main rival Yulia Tymoshenko, whose politically motivated prosecution and imprisonment prompted the EU to demand measures against what it euphemistically termed selective justice.  The arrests over this last week, including that of a second journalist, bear a disturbing resemblance to the Bolotnaya Square trials in Russia and show which path Yanukovych has opted for.

It is a path which the peaceful protesters in Ukraine are currently demonstrating their rejection of, and criminal prosecutions to crush peaceful protest are as unacceptable as the violence meted out by Berkut last week.