So what are Crimean anti-terrorist officers doing in central Kyiv?High-Price Pro-Government ProvocationOpen Statement to the International Democratic CommunityBorys Gudziak: Spread the story of their courage and fortitude!Maidan: "I came because I couldn’t not come"Hundreds Injured in Kiev as Riot Police Crack DownInternational Renaissance Foundation breaks off collaboration with Ukrainian authoritiesUHHRU calls for President’s Impeachment and Dismissal of GovernmentPolice action incompatible with democracyBerkut violently breaks up EuroMaidanUS warns of consequences if EuroMaidan dispersedThugs attack Channel 5 film crew near pro-government rallyHromadskie.tv journalists beaten up in centre of KyivNo will to investigate harassment of journalistsNew political season brings journalists increased threats and intimidationCases of censorship and obstruction tripleTitushko and fellow assailants receive suspended sentencesAssaulted journalists angered by whitewashing of passive police officersOutrage and police excuses over Berkut violence against journalistBerkut riot police disperse peaceful protest on Independence Square
• Теми / Кримінально-виконавча система
• 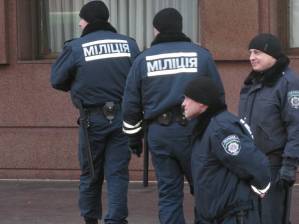 Given the evidence that police and elite special force officers have been brought into Kyiv in the last couple of days, any police anonymity becomes especially unacceptable.  OZON, the civic initiative monitoring freedom of peaceful assembly has observed small groups of men apparently in police uniform but with only the word police itself, with no way of identifying either the unit that the person is from or the person’s name and rank.

The Centre for Civil Liberties which OZON is part of has written to the Prosecutor General, Viktor Pshonka,

It reports sightings by OZON monitors of 3 men on one occasion, four on another, where the only thing that can be identified is that the men are from the police.  The Centre points out that this is in breach of the relevant Interior Ministry Order from 2002 (No. 536) which specifies the means required for enabling recognition of specific officers and units.

Interestingly, when the OZON monitors pointed out the infringement, the officers said that they were from the Department for State Security (responsible for guarding the president and other top officials).  In that case they are in serious breach of the law since the structure is completely separate and they should not be wearing any police signs.

Oleh Martynenko from OZON does not believe there to be any particular subterfuge and says that such sloppiness is typical.  In present circumstances, especially during a weekend where there were mass pro-European integration “EuroMaidan” and counter- pro-government – demonstrations, it is of particularly critical importance that police can be identified.