Over 5,000 demonstrate in Lviv against arrest of Svoboda Party membersLviv: Brush up your Russian and brush away stereotypes.Lviv provocation on 9 May: No joking matterTortured for damaging a bust of StalinYoung activists charged with damaging statue to Stalin released pending trialStudent charged with damaging statue to Stalin released pending trialLeader of nationalist organization gets four months for a pistolFile on those accusing of damaging Stalin monument passed to the courtStudent will remain in custody over beheaded bust of StalinMore on the “Zaporizhya Terrorists”Police detain two more members of civic organization TryzubSearch of Poet’s Home – No need for fear, colleagues and human rights activists adviseDestruction of Stalin monument – pretext for repression?KHPG: On the arrest of a number of members of VO TryzubThe Korniychuk Case – evidence of the start of repression in Ukraine?On the detention in custody of lawyer Yevhen KorniychukLutsenko to remain behind barsThe Economist: Concern over developments in Belarus and UkrainePolitical repressionTax Code Protesters’ Maidan dispelled the hypnotic fear of the regime
• Topics / Politics and human rights
• Topics / Civic society
• Topics / Human rights protection

Committee in Defence of Modern Political Prisoners formed in Lviv 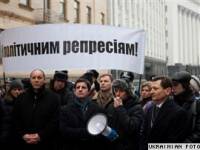 The decision to create the committee was taken on Monday 30 May at a public rally “Stop political repression in Ukraine!” by former political prisoners, human rights activists, academics, writers and local politicians from the Lviv region.

The Committee in Support of Modern Political Prisoners will publicize information about political prisoners in today’s Ukraine and will initiate large-scale protests and other measures.  They consider political prisoners those who are presently being held in prison or SIZO [remand units] for their political and civic position. For writer Roman Ivanychuk this is first and foremost Yury Lutsenko.

Those present at the public rally also named as political prisoners the eight members of the Svoboda Party who are being held in Lviv SIZO supposedly for hooligan actions during the events on 9 May in Lviv, as well as former government officials in Prime Minister Tymoshenko’s government.

Former political prisoner Iryna Kalynets stressed that the Committee would take on particular cases. She called on all those present to write to the Prosecutor’s Office statements to the effect that “I was involved in the events of 9 May in Lviv: add me to the case”.

She said that when Mykola Kochanivsky was tried for damaging the monument to Lenin in Kyiv, she, Ihor Kalynets, Stefania Shabatura, Ivan Hel and Yury Shukhevych all submitted such a statement to the Prosecutor’s Office, saying that they were implicated in the damage and demanding that the monument be dismantled. She believes that people are being persecuted for being Ukrainian and that the present regime is persecuting the Ukrainian regime which they chose.

Members of the Lviv community are asking foreign governments to react to political repression in Ukraine. Their appeal states that “a model of an authoritarian dictatorship is being imposed in Ukraine with persecution and repressive measures against opposition forces; pressure has increased on the media;  the Orthodox Church under the Moscow Patriarchate is receiving preferential treatment;  they are moving in the direction of justifying Stalin and whitewashing Stalinist despotism”,

One of the original founders of the Ukrainian Helsinki Group and former political prisoner, Myroslav Marynovych is convinced that the world must know the position of the Lviv community.

“We need to present our position so that the West hears it, as well as people living in Eastern Ukraine. I understand that 22 June (the anniversary of Nazi Germany’s invasion of the USSR - translator) will be another, international, dimension of the problem, since it has been announced that a group from the Russian State Duma is to arrive. What is happening today is a bitter thing for me since I feel to blame that we, all the former political prisoners did not manage to condemn communism as a crime through the court. We must not succumb to provocation, not give them the scenario that they expect. We will do everything to avoid being pushed into such a scenario”, he stressed.

President Yanukovych has denied that there are political prisoners in Ukraine and the leadership of the Lviv Regional Administration ignored the public rally.