Only two TV channels showed the journalists at Mezhyhirya

According to monitoring carried out by Telekritika, aside from Channel 5 and TONIC, no television channels mentioned the visit by journalists to Yanukovych’s luxury residence, Mezhyhirya.  Considering that a peaceful gathering timed to coincide with Journalist Day and intended to remind the President of a promise made on television a full year earlier and not kept, was banned by the court, this was surely of public importance.  As reported, journalists from Stop Censorship, having been thwarted in their effort to exercise the constitutional right to peaceful assembly, decided to travel to Mezhyhirya to see how the court order was enforced.

Yanukovych drove past ignoring the journalists altogether, although that day there was a lunch for certain selected journalists.

UTV-1 chose to report the President’s greetings to journalists in general, rather than the action with very prominent Ukrainian journalists in particular which he too had ignored.

Certain other channels, like Inter, owned by the Head of the Security Service and media magnate, V. Khoroshkovsky, and Ukraina, owned by the National Deputy from the Party of the Regions and billionaire, R. Akhmetov had not sent film crews at all, so not surprisingly did not cover the event. 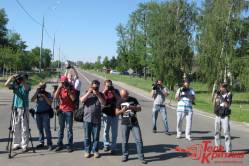