Prosecutor’s son accused of causing the death of three pedestrians released on bailTwo former subordinates of Yulia Tymoshenko released pending trialJudge is in a hurry with Tymoshenko trialPolish Ambassador: Prosecuting opposition politicians can lead to bad habitsTime to name names, Ms ClintonWhile Lutsenko criticized the court, his property was being frozenUS State Department: On the Prosecution of Ukrainian Opposition LeadersEuropean Commission Ambassador calls conditions of Tymoshenko trial inhumanBBC: Tymoshenko on trial in Kiev for abuse of powerFormer Minister under Tymoshenko, Valery Ivashchenko goes on hunger strikeMEP Hard-hitting Questions about Highly Selective ProsecutionsCall on EU to get tough with new Ukrainian leadershipUkrainian World Congress expresses grave concern over political prosecutionsEuropean Parliament Resolution on Tymoshenko CaseAppeal to the Leaders of Democratic CountriesOn the Criminal Prosecution of Yury LutsenkoSurvey: Almost 50% see political repression by the regimeMore high-level warnings against persecution of the oppositionTymoshenko prevented from visiting voters within UkraineUkrainian TV Patch Up Job on PACE Recommendations
• Topics / Politics and human rights
• Topics / The right to a fair trial
• Topics / Civic society 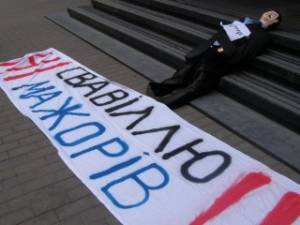 Cases where the sons of deputies, prosecutor’s and others in high places escape criminal liability in Ukraine are legion.  The video footage showing Roman Landik, son of a National Deputy [MP] from the Party of the Regions, himself a recently elected deputy of the Luhansk City Council, trying to chat up a girl and then beating her badly when rebuffed did however cause waves.  Whether these will lead to any criminal charges and an actual conviction is, unfortunately, doubted by many Ukrainians.  At present Roman Landik is apparently in custody in Russia where he fled following the publicity which forced even his father to make stern noises.

At the end of last week the civic organizations forming the Partnership New Citizen held a protest demanding that Roman Landika be prosecuted.

During the protest an effigy of the “mazhor” [one of the young representatives of clans in power] was dragged from the office of the Party of the Regions to the Ministry of Internal Affairs and left on the stairs as a symbol of the public verdict on all who break the law regardless of their origin, status or level of income.

The protest was organized to warn the authorities that the appearance of one offender in the court should not be merely an isolated fine theatrical gesture by the Party of the Regions and leadership of the country.  If the authorities really want to fight to ensure observance of the law they should create a system which would work automatically and punish all those offenders, even if they themselves hold high posts or if their fathers are close to the sources of power. Without this, any possible prosecution of Roman Landik will turn into a farce aimed at concealing the flawed nature of the existing law enforcement system.

The activists also passed an appeal to the Party of the Regions, demanding that both Roman Landik and his father who are no longer worthy of representing the public’s interests be thrown out of the Party, and publicly condemned.

On 11 July several dozen NGOs addressed an appeal to the President, the Prosecutor General, National Deputies and the leadership of the Party of the Regions demanding an objective investigation of the events in the Luhansk restaurant on 4 July and that those guilty be punished.

Landik’s beating went on for a considerable amount of time.  Nobody intervened, nor did the police who finally turn up actually detain him.

The civic organizations called on the police to put an end to the lawlessness of such “majory”. They expressed willingness to provide the necessary defence and help to those who have suffered from their behaviour, as well as to rouse publicity in all just cases where people’s rights and dignity are infringed by those with family links to the regime in power.

The protest was initiated by the New Citizen Partnership which unites over 50 civic organizations. 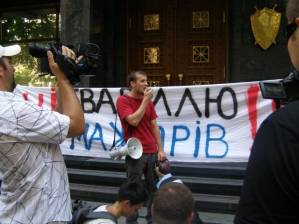