The story in fact, is about the owner of a Porsche Cayenne, Serhiy Serhiyenko, his very specific form of road rage and the police response, but Janis Joplin’s legendary song about those with power and money is by no means irrelevant

The Svidomo Journalist Investigation Bureau reported a bizarre incident on 22 July.  One of the EQUITES team of extreme travellers, Kostyanyn Mohylnyk told them how he was driving his Mazda, with his wife and two small children in the car.  He was in the left lane and stopped at traffic lights.  Suddenly a young guy between 25 and 30 got out of his Porsche Cayenne and came up demanding that he let him go ahead and went out onto the intersection which is, of course, against the Road Code. He refused, and the guy began threatening him. “We drove on for several metres, then suddenly the Porsche overtook me and blocked my way. The driver got out and slashed my front wheel, then disappeared”.

Kostyanyn Mohylnyk called the traffic police who drew up a report, however he didn’t wish to stop there and swore he would find this “mazhur” [the term used for young and rich offspring of those in high places who get away with just about anything – translator] and make the case public.

How they “punished” the Porsche Cayenne mazhur

The lieutenant of the Solomyansk Police Station, Turitsyn, spent 10 days considering the statement regarding the incident submitted by Kostyanyn Mohylnyk.  He questioned the two witnesses who confirmed everything.  He found a CCTV recording from a neighbouring bank which also proved that Kostyanyn Mohylnyk was telling the truth.

The police then found the culprit and asked that he get in touch but he, citing Article 63 of the Constitution, refused to give any comment. According to the check carried out they concluded: there was no hooliganism and they imposed an administrative fine of 119 UAH [just over 10 EUR] on the owner of the Porsche.

Svidomo tracked down the Porsche owner, who proved to be the Executive Partner of the Ukrainian branch of the Real Estate firm CB Richard Ellis LLC, Serhiy Serhiyenko.  Kostyanyn Mohylnyk recognized the young man who first threatened him, then slashed their tyre while his wife was feeding their baby.

Svidomo rang the company but the secretary refused to put them through to the Director. They were told: “Mr Serhiyenko asked me to pass on that there was no such incident and he did not slash the wheel”.

More about the company and its head here: http://building.ua/index.php?PGID=39&NID=855

From information at Svidomo 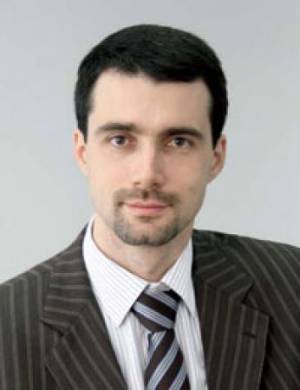