Threats against Crimean political prisoner sentenced to 14 years for pleading innocent A brief description of the KHPG strategic litigations in July–December 2020Russia begins its most repressive trial of Crimean Tatar journalists and activistsRussian ‘pride’ over invasion and annexation of Crimea is fading fastAccountability for Crimes Committed in Eastern Ukraine: Q&A on FIDH-KHPG’s Article 15 Communication to the ICCA brief description of the KHPG strategic litigations in January – June 2020Why were Wagner fighters from Russia seized in Belarus and can Ukraine get them extradited?Russia’s puppet Crimean leader hides from Crimean Tatar veteran activists outraged by his liesThe Easing of MoralsCrimean Tatar civic journalist “taken at gunpoint and deported” for reporting on repressionWith open eyesUkraine takes vital move to fight Russia’s destruction of cultural heritage in occupied CrimeaSushchenko & Aseyev: You helped get us released, now help imprisoned Crimean civic journalistsA brief description of KHPG strategic litigations in July–December 2019Russia uses torture-like conditions to try to break imprisoned Crimean Tatar civic activistsBitter echoes of Stalin’s Deportation in Russia’s persecution of Crimean TatarsAccountability for international crimes committed in Ukraine between 2014–2018Arsen Dzhepparov is facing a huge sentence in Russia for refusing to give false testimonyA Ukrainian obituaryDoting grandfather, Volodymyr Dudka and Russia’s ‘Ukrainian saboteur’ repression by quota
• Topics / Environmental rights
• Topics / Civic society 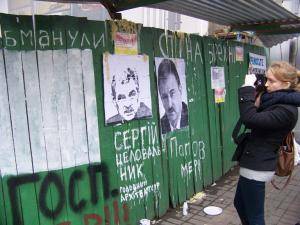 A “Wall of Lies” has been erected in the centre of Kyiv in the place of a scandal-filled construction site. It will now sport the portraits of officials who are believed to be responsible for unlawful construction work in the city and/or who have not kept their word. .

The “Wall of Lies” is a fence around the controversial construction near the Teatralna metro station. This is no chance choice. The city authorities had promised to pull down the illegally constructed office and shopping centre, yet nothing has been done to get rid of it.

The “Wall of Lies” has been created by activists from the Investigative Bureau Svidomo and “Kyiv Residents united”, as well as many other concerned residents of the capital.

The first wall is adorned by a portrait of the Head of the Kyiv Administration Oleksandr Popov, as well as the Chief Architect of Kyiv. It is thanks to them, activists say, that the city is losing its face by the day.

After they pasted up the portraits, they hung up noodles (“stringing up noodles” in Ukrainian and Russian is used about people telling cobblers / talking rubbish – translator]. The sign underneath reads: “Write how they deceived you”.

Nor were people slow in coming forward. Such walls have now appeared at other “hot spots”.

The activists plan to keep updating the walls and propose meeting once a month.