No justification for bans on Chornobyl clean-up workers’ protests 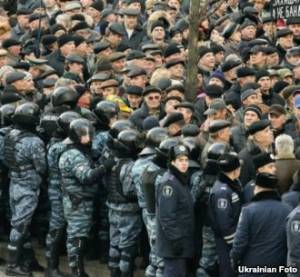 The Kyiv Administrative Court of Appeal has allowed an application from the local administration and banned Chornobyl clean-up workers’ organizations from picketing the Cabinet of Ministers’ building. Dozens of former Chornobyl clean-up workers have begun an indefinite hunger strike outside the Cabinet of Ministers, demanding that their social payments be returned to them as per court rulings.

Their demands include putting payment of their pensions into the State Budget for next year. There have been numerous court rulings ordering that payments be made in full, however the Head of the Pension Fund, Boris Zaichuk stated at a press conference in Kyiv that the government “rejects all these rulings and will reject them”.  He removed that up till 1 November there had been over a million court cases over pension payments involving a total of almost six and a half billion UAH. He adds that there are still more than two and a half million civil suits for almost six billion UAH. He says that all these court rulings will be appealed.

With regard to the court rulings in favour of those seeking payments, Prime Minister Azarov spoke of “not isolated falsifications” and instructed that each verdict be checked. At a Cabinet of Ministers  meeting on Wednesday he alleged that “certain lawyers close to the courts collected lists of Chornobyl clean-up workers, persuaded them to lodge claims and effectively for a bribe organized hundreds and thousands of court rulings”,

The Head of the Board of the Ukrainian Helsinki Human Rights Union, Arkady Bushchenko calls the situation “legal nihilism”. “A government that orders court rulings to not be enforced has no moral right to demand anything from its citizens”. He considers non-enforcement of court rulings which have come into effect to be a violation of the European Convention on Human Rights, while court bans on demonstrations and protests violate citizens’ constitutional right to freedom of peaceful assembly. “I don’t know how the protests by Chornobyl clean-up workers can obstruct the normal functioning of State authorities or pose a threat to public order, however according to the Constitution, if people are unarmed they have the right to gather freely and express their views, protest and dissatisfaction with the authorities”.

The President of the Centre for Market Reform Volodymyr Lanovy agrees with the government that there is no money for the social payments. He is convinced that the payment arrears can no longer be resolved through the courts or by other legal means since Ukraine is now in a debt trap. He believes the refusal by the State to enforce its social obligations means the bankruptcy of the regime and that social payments can only be restored by changing the economic policy, running it in the public’s interest and stimulating growth of the economy, production, economic freedom and competition.