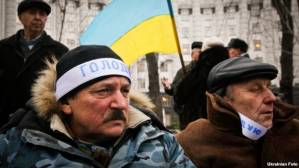 One of the former Chornobyl clean-up workers on hunger strike in the Mariyinsky Park opposite the Cabinet of Ministers building in protest at reduced pensions and unenforced court rulings has spoken of the help they have been receiving. He says that Kyiv people are bringing them warm things, tea and coffee, medication, as well as money. He said that other former Chornobyl clean-up workers are coming from other regions of the country to join their protest. They plan to continue their hunger strike out in the open and not erect tents even if the snow begins and it becomes very cold.

He added that they had been visited the day before by somebody from the Pension Fund who said the same as the government, that there’s no money.

There have been no confrontations with the police, he said, with the latter simply standing, watching. Dzerkalo Tyzhnya reports that around 50 Berkut riot police were seen in the park, as well as four police vans.

On Wednesday the police drew up administrative protocols against 19 of the protesters on hunger strike outside the Cabinet of Ministers. 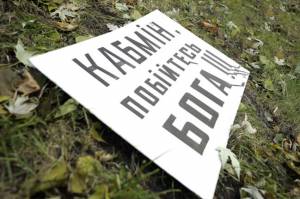