One of Vaclav Havel’s Last Messages was a Belarus Appeal 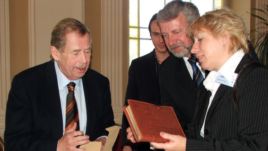 Vaclav Havel (left) with a longtime Belarusian opposition leader, Ales Milinkevich during a meeting in Prague.

PRAGUE -- In one of his last public messages before his death on December 18, longtime dissident writer and former Czech President Vaclav Havel expressed solidarity with political prisoners in Belarus.

In a message given to RFE/RL's Belarus Service ahead of the one-year anniversary of a disputed presidential vote and resulting protests in Minsk, Havel's message was addressed to jailed presidential candidates Andrey Sannikau and Mikalay Statkevich and other opposition figures imprisoned during the crackdown.

"I will continue to use any opportunity in the future, together with my friends, to draw the international community's attention to the violations of basic civic rights in Belarus, " Havel said in the letter.

Havel frequently spoke out against the postelection crackdown in Belarus and was a long-standing proponent of human rights and greater political freedoms in that country.

"I wish you all the best and freedom for your country, " said Havel, one of the most powerful moral authorities of his generation in the former Soviet bloc and around the world.

An outpouring of tributes to Havel have flowed in since news of his death, with a state funeral tentative planned for December 23.

Critics of Belarusian President Alyaksandr Lukashenka's regime were planning events aimed at circumventing official strictures on dissent as the anniversary of the election approached.

The year has seen roundups and raids, punitive measures against defense lawyers of government opponents, and lengthy prison sentences for leading anti-Lukashenka voices in Belarus.