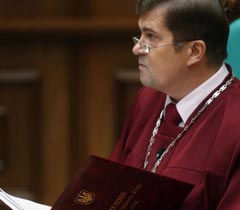 Anatoly Holovin, Chair of the Constitutional Court (photo from UNIAN)

Ukraine’s Constitutional Court has declared it constitutional for the Cabinet of Ministers to be allowed to determine the size of social payments depending on the financial resources available.

This states that in 2011 the provisions for fomer Chornobyl clean-up workers, children of the War, pensioners and military servicemen are applied according to the procedure and amounts fixed by the Cabinet of Ministers on the basis of the financial possibilities of the 2011 Budget.

In July 2011 the Ukrainian Helsinki Human Rights Union sent a letter to the Human Rights Ombudsperson asking her to do she could to have Item 4 revoked.

“These amendments envisage cancellation of specific amounts defining social rights and guarantees which are fixed through special laws for these groups of people.

This is being done by transferring the authority to fix the size of socio-economic guarantees to the Cabinet of Ministers which will, at its own discretion, based on the country’s financial possibilities, determine who will receive how much.

Bearing in mind the lack of funding for these benefits even now when the law clearly stipulates their size and anyone can defend their rights through the court, it is entirely clear that this step has been chosen by the government as a means of not honouring the socio-economic rights and guarantees set down in law, while avoiding responsibility for this”.

UHHRU stressed that making this dependent on the decisions of the Cabinet of Ministers is in breach of the principles of the rule of law – the principles of proportionality, meeting legal expectations, legal certainty.  There is insufficient openness and public accessibility with the adoption of subordinate acts.