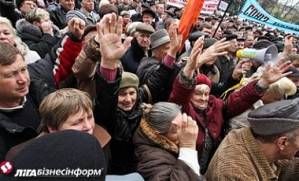 “The authorities have cynically not kept their promises. They made them only so that we would stop our protests and dismantle the tent camp, then immediately forgot about them. For this reason in Lviv a Resistance organizing committee has been created to coordinate protests by former Chornobyl clean-up workers and small-business owners throughout Ukraine. It is made up of representatives of a number of Chornobyl clean-up worker and business organizations from various regions of the country.

Ruslan Sekela says that the first protest will be outside the Lviv Regional Administration, and predicts a wave of such protests around the country. He says that they will be starting their protests so that the authorities stop feeding them empty promises and says that a new Maidan [mass demonstrations, like during the Orange Revolution) will begin from out of the protests of the former Chornobyl clean-up workers and business owners’ protests.