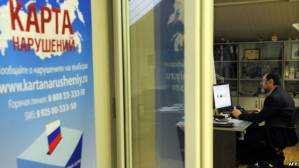 A Golos staffer working at the monitoring body’s office in Moscow, which it may be forced to vacate.

Even before polls closed in Russia’s parliamentary elections, accusations of vote-rigging and fraud -- all to aid the ruling United Russia party -- had been widely reported. And in the Age of the Internet, some of the alleged violations have been filmed or photographed and posted on the web.

Russia’s only independent election monitor has announced that it plans to deploy 2, 000 observers during the March 4 presidential election despite facing what it describes as intensifying harassment from authorities.

The election-monitoring organization Golos also launched its controversial interactive map of electoral violations on schedule, despite being pressured to vacate its Moscow offices and threatened with a power cut.

Golos’ announcement came a day after it made public a letter it received on January 16 from the company it rents office space from, ordering it to vacate its headquarters by February 1. Golos officials said the move would hinder the group’s ability to monitor the presidential election and called it the latest example of harassment from the authorities.

Olga Novosad, Golos’ spokeswoman, said the group has paid its rent through August 1, adding that the "Literaturnaya gazeta" publishing house where they rent offices gave no grounds for the request.

Novosad said Golos’ management refused to sign the letter and annul the lease, after which they received another notice informing them of an impending power cut in the building that will last until March 6 -- two days after the election.

“We asked them to be patient as we are looking for new offices anyway, then yesterday (January 24) we received [another] letter saying the power will be cut off from today through March 6 because of a breakdown, " Novosad said. "We still have electricity in the office at the moment, but we do have this official letter.”

Novosad said that they have never had problems with their landlord before and that the sudden appearance of problems as the presidential election campaign gets under way is a troubling sign that the authorities plan to step up the pressure on them.

“This company is a business. The office space is paid for with money, " Novosad said. "It’s clear that we were profitable -- we suited them according to the contract and they suited us. And it is only now ahead of the elections when our work becomes really hot [that this happens].”

Golos Deputy Executive Director Grigory Melkonyants was quoted by Reuters as saying that "Literaturnaya gazeta, " a private company, would only take such a step if pressured by the authorities to do so.

"It’s not their own initiative, " he said.

Management at "Literaturnaya Gazeta" told the state-owned RIA-Novosti news agency they asked Golos to leave because the company is expanding its activities and needs more space.

’Their Methods Are Known’

Golos has faced pressure from the authorities in the past.

Prior to last year’s parliamentary elections, Golos was fined and threatened with closure for publishing an interactive map of electoral violations a day before the vote. Prosecutors said the map violated a law prohibiting the publication of opinion poll data five days before an election.

On December 4, the day of election, Golos’ website was taken offline by a denial-of-service attack by hackers.

“Apart from the fact they are trying to force us out of our office, their methods are well-known, " Novosad said. "For instance, when we host events, it’s difficult for us to find a place because they don’t let us host these events or conferences, so we have to try and find places that don’t reject us."