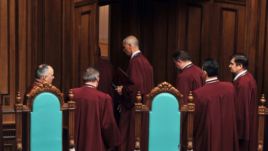 The Regions Party and Presidential Administration continue to wax eloquent about the Constitutional Court’s protection of privacy in its 20 January judgement. Most media and human rights groups, however, warn of the judgement’s likely impact on freedom of speech and access to information.

The following considers why the judgement should have an impact, though not at all that which was planned.

Response is needed precisely because the Court so obligingly handed down a definition of “confidential information” which can be used to stifle the over-inquisitive and conceal corrupt dealings. And this at the beginning of a crucial election year leaving those in power with apparently clean hands and the result required.

Vague and unforeseeable limits to what information can be restricted will knock any wish out of a lot of journalists to test the limits, which is highly convenient with elections approaching.

Some jwill continue to expose corruption, pressure on the courts, political persecution used as a form of election campaigning, etc.  They may even remain untouched on the grounds that the damage from the inevitable outcry would outweigh any inconvenience from the actual material. The calculation is probably correct. The most shocking revelations from journalist investigations of real public importance are virtually ignored by the authorities. They know they can get away with this since the media buzzes for a day or two, then falls silent.

The UK parliamentary expenses scandal in 2009 sent heads rolling and resulted in real measures to avoid abuse in the future. We are not talking about qualitatively different politicians, but of radically different expectations – and demands.  These include demands of the press who should not let go before it is clear that something will change. Here one article is manifestly not enough, with the citadel needing to be stormed by other journalists, all armed with questions.

It is time for Ukrainian journalists and NGOs to develop new strategies while raising public awareness of what must not be concealed.  We need to agree which information should be considered private (affairs, sexual orientation, etc) and which must not be restricted in the public interest.  This includes everything that we are entitled to demand from people who decide (or will, if elected, determine) how taxpayers’ money should be spent.  Or that could indicate corrupt dealings.

If the Constitutional Court has ruled that a politician’s home is his fortress barricaded from the public by a double wall  of metal and the right to privacy, there is no sense arguing. The judgement is final.

They cannot, however, stop the questions which are just begging to be asked. These should be posed with maximum frequency and from all quarters. They should also elicit additional questions from the anti-corruption body GRECO and the International Monetary Fund.

Who cares that we understand all too well what they’re concealing from the public and whose money they’re spending? We are just as aware that the questions put them on the spot. There is no reason whatsoever to oblige, as did Savik Shuster in his political talk show on the State-owned UTV-1 when he suddenly chose to discuss the French decision on the Armenian Genocide and not reductions in social payments.

There can be no fudging questions about social benefits to government officials living it up in luxury State-subsidized homes when other groups in society have seen their incomes slashed.  The list could form an Openness Charter sent in the first instance to all candidates in the October parliamentary elections, asking for their endorsement as agreement that information about them and their families of public importance is not confidential. If, as we are assured by the President’s Administration there are no problems with access to public information, why not sign?

If endorsement is not forthcoming, then we publish the list of those prepared to sign, and the list of questions which the others consider “information on restricted access”. Stripped of the verbal fluff, these are the questions from taxpayers and voters about carrying out duties and spending public funds that the politicians prefer to avoid.

All such questions should be raised again and again, including in English. They can be taken up by foreign journalists and members of European structures unaccustomed to politely changing the subject when somebody tries to wriggle out of answering.

The current regime seems oblivious to journalists’ revelations, devastating falls in most international ratings and has even managed to call the latest PACE Resolution a “triumph”.  With main TV channels largely under its control, and a vast array of other far less than fair means for clinching the results of October’s elections, other strategies are vital.

Demonstrating politicians’ and officials’ unwillingness to answer questions of public concern can help enable voters to make an informed choice. Before the elections all citizens are entitled to know who is genuinely ready for anti-corruption measures, openness and accountability and who will settle for increasingly unconvincing imitation.