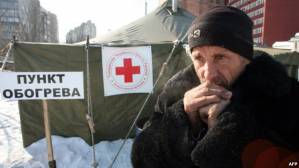 KYIV -- Ivan Brilyuk is 45, but he looks much older.  With his white beard and swollen, chapped face and fingers, Brilyuk is one of the hundreds of thousands of homeless people that Ukrainian social workers say are suffering the worst of the recent cold weather.

Brilyuk is relatively lucky. He has made his way to one of the hundreds of heated tents set up by the authorities in response to a cold wave that’s seen temperatures dip to minus 30 degrees Celsius.

Brilyuk, who’s been homeless since being thrown out by his wife several years ago, insists he’s grateful for even the most basic of comforts.

"Like in the Gulag, give us at least a hut, " he says. "Give us warmth, some comfort, a place to wash, to shave, to clean ourselves up. I don’t have any money, I don’t have anything. You can see the kind of shape I’m in. If we’re needed by this state, then we want to work."

But the tent where Brilyuk is trying to warm up has only a few plastic chairs. After an hour or so, he’ll be back out on the street, returning to the unheated Kyiv basement where he sometimes sleeps.

Authorities have set up more than 3, 000 heating stations across the country and provided food and warm tea for visitors.

But social workers and other experts say that without full-time shelters, which provide a heated place to sleep, and an effort to direct homeless people to warm spots, the current death toll of 135 is only set to rise as the cold weather continues.

Most of the deaths have been reported in Ukraine’s eastern Donetsk and Dnipropetrovsk regions.

Lyudmyla Denisova, Ukraine’s former minister of labor and social policy, maintains that many homeless people are unaware of the shelters or simply unable to make it to them.

"The authorities should go and collect people, " she says. "These people are freezing."

The cold-weather deaths in Ukraine -- higher than in Russia, Poland, or anywhere else in Europe -- have focused attention on the plight of the homeless, who continue to suffer from Soviet-era stigmas that equated them with drug addicts, criminals, and "antisocial elements."

Even now, authorities have sought to portray the winter-related casualties as an affliction affecting social outcasts.

Hryhoriy Marchenko of Ukraine’s Emergencies Ministry said on February 6 that alcohol abuse was to blame for most of the recent deaths.

Pavlo Rozenko, an expert on social policy with the Kyiv-based Razumkov Center, says a negative stance toward the homeless was contributing to a poor official response to the crisis.

Lack Of Shelter And Warmth

Rozenko also suggests that the number of people dying from the cold is also higher than official figures suggest.

​​"It’s clear that government statistics are underestimating the number of deaths, " he says. "The authorities are registering only those deaths that they see. But homeless people aren’t only dying outside on the street. They’re also dying in run-down premises -- places where there’s no heat, no water. It’s clear that those kinds of deaths are taking place out of the view of the authorities."

​​Ukraine’s Health Ministry has said that forensic examinations must be conducted to determine the cause of death in the wave of recent fatalities, and that a diagnosis of hypothermia -- a drop in body temperature that is the most common cause of cold-related deaths -- could not be automatically assumed in all cases.

Tetyana Yurchenko, the head of the ministry’s press service, said many people had died in their homes and as a result of heart problems.

But Brilyuk, who has seen many acquaintances die in the past week, claims it’s the cold that’s the killer -- particularly for those, like him, who have no access to the basic comforts of shelter and warmth.

"The house manager throws them out, " he says. "The neighbors throw them out. And a person simply goes out on the street and freezes. Where can he go?"