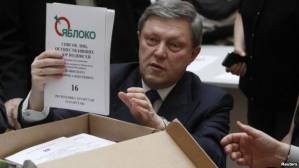 Yabloko party founder Grigory Yavlinsky opens a box of signatures supporting his presidential candidacy at the Central Election Commission in Moscow on January 18.

The commission last month ruled that too many of the signatures Yavlinsky submitted in support of his candidacy were invalid and rejected his application.

Yavlinsky’s lawyers argued that the law does not forbid candidates from submitting photocopies of signature sheets and that Yavlinsky did so because he was given just one month to gather 2 million signatures from across Russia.

Yavlinsky has five days to appeal the decision to the Supreme Court Presidium.