Black Gold mixed with BloodYet more miners die in Ukraine’s minesUkraine’s Mines remain deadlyMiner who complained of inhuman conditions after mine disaster “transferred”Ukraine’s Miners: Put at Risk and ExploitedAnother methane explosion at a Luhansk region mineNo End to the Deaths in Ukraine’s Mining DisastersUnion blames Mine Owners for Fatal BlastRefined torment of minersReformers of the Mining Industry – Miners’ Opinion not needed?On illegal mines in the Donbass region and where the Police and other authorities are not lookingWere miners left to die after the explosion at the “Zakhidna” Mine?More victims of Donbas’ illegal minesOrganizer of illegal mine imprisonedPit No. 8: Illegal Mines in UkraineMain hero of illegal mining film savagely beatenMore victims of police protection of illegal miningPutin threatens to increase Russia’s ‘support’ for occupied DonbasUkrainians’ tolerance towards unlawful violence is increasing – human rights protectorsNo money for medics in occupied Crimea & Russia, while 15 billion spent to rubberstamp Putin’s life presidency
• Topics / The right to life
• Topics / Social and economic rights

Donbas Miners: Neither decent working conditions, nor a normal burial 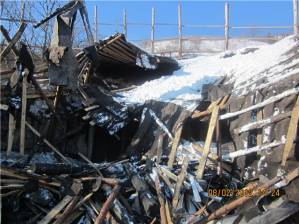 Kostyantin Ilchenko from the Solidarity Labour Movement gives more details about the latest tragedy at a kopanka or illegal mine in the village of Pavlovka (part of the city of Sverdlovsk).  A fire at the mine on 2 February killed one miner while two others are still missing.

The author says that the illegal mines are part of the activities of the Luhansk coal mafia, and says that the existence of such mines demonstrates the lawlessness of the local authorities and those politicians who at the highest level provide a cover for “thieving officials”.

The body of the first victim was brought to the surface on Saturday, 4 February. On that same day, Ilchenko writes, they learned that Sverdlovsk’s Mayor, with the blessing of the city Prosecutor’s Office, had decided to end rescue attempts and fill in the excavation, despite two men still being inside the mine.

These plans, however, could not be carried out: most likely because of the very low temperatures the swift plans to fill in the mine (thus, according to Ilchenko, concealing the fact that there was a kopanka there) were postponed until Monday.

He points to the cold indifference to the feelings of the two men’s families who needed – and had the right – to at least bury them and have graves to lay flowers on.

Their organizations’ efforts, with the support of the media, succeeded in drawing attention to the tragedy and the protest by relatives of the men on 6 February, and this led to the plans to fill in the kopanka being stopped.

An official statement was also made promising that the rescue work would resume and that the men’s bodies would be brought up.  This, however, judging from the experiences of the men’s families, being sent from one official to another, was the latest in many lies.

Alexander Chizhev was 40 years old, Vitaly Bryzgalin younger – he was born in 1974.  Through talking with other miners, they are able to predict where the men’s bodies are likely to be.

Ilchenko believes that the authorities, including the Mayor and Luhansk Regional Governor, Prystyuk are positively hampering any rescue efforts, and want to simply fill in the mine.  Each body he says is more trouble for them, more undesirable evidence.

From the material posted here http://politiko.ua/blogpost77381