A brief description of KHPG strategic litigations in July – December 2018A brief description of KHPG strategic litigations in January–June 2018Donbas betrayedVI. Right to privacy5. The right to privacyPolice StateRailway ticket are again to include names14. VULNERABLE GROUPS AS TARGETS OF DISCRIMINATION, RACISM, XENOPHOBIA AND HATE-RELATED CRIMESPolice access to the names of SIM-card ownersUkrainian electronic rail tickets incompatible with travelHuman rights in Ukraine 2009 – 2010. 5. Right to privacy2010 Thistle of the Year Anti-Award Recipients announcedThe State is watching you everywhere!Ministry of Transport agrees with human rights groups over named railway ticketsHuman rights in Ukraine – 2007. 5. The Right to PrivacyHuman rights in Ukraine – 2006. XXI. The main human rights violations linked with human traffickingIs it correct to include passport data on railway tickets?On the language policy in Ukraine
• Topics / Chronicle

Maxim Shcherbatyuk, UHHRU lawyer, relates his travel (or otherwise) experiences following the statements Ukrzaliznytsya [Ukrainian Railways] made throughout the country on 10 February.  The public were told of unheard of progress in electronic ticket sales, with these making up 1% of all tickets sold at the present time. Maxim decided to try this wonderfully convenient method out.

His train was close to midnight, so he fortunately arrived at the station a bit early.  Which he had cause to be thankful for.

All the special desks where they print out these electronic tickets proved to have closed at 20.00.  He found out at information that a normal desk would print the ticket, however there wasn’t one that didn’t have a queue of at least 10 people.

A total disaster for those arriving minutes before the train is to leave, but Maxim had some time and decided to stick out the queue. At least he first went up and asked if he could get the ticket printed without standing in the queue but did not get an answer.

Nor, however, was he told that he needed to go to the opposite end of the station to the ticket desk administrator.  That he found out only after 30 minutes in the queue.

Maxim’s difficulties continued for some hour and a half, until he finally managed to get the ticket.

He used the remaining 12 minutes before his train left to express – no difficulty imagining what – in the book of complaints, which proved the only thing easily available in the capital’s central railway station.

He holds little hope that electronic tickets will take off in Ukraine until Ukrzaliznytsya can develop a different attitude to its customers. 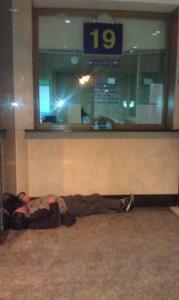