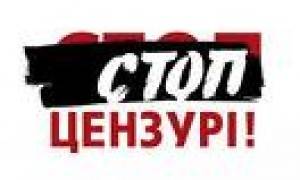 On Thursday the journalist movement Stop Censorship issued a statement indicating its condemnation of the court ruling closing the website “Dorozhny Kontrol”.  Giiven the concern that such an order could have been issued, we post the statement although the order was later revoked.

As reported, the website (http://roadcontrol.org.ua/). which monitors infringements mainly by the traffic police of drivers’ rights has been – supposedly temporarily – blocked because of a defamation suit brought by a traffic police special Cobra unit inspector against the owner of the website.  The latter, Rostyslav Shaposhnykov, says that the civil suit is not over material which the website posted, but on comments to them.

Stop Censorship, as have others, stresses that the practice in this case could be applied against all Ukrainian media outlets.

“The movement Stop Censorship is outraged by the court order to close the website Dorozhny Kontrol. This does not only entail restriction of the rights of one of the most active civic organizations in Ukraine. Such a ruling sets the ground for extremely dangerous practice. This could be used against all Ukrainian media outlets and restrict citizens’ right to information.

We would note that Judge Salamon from the Desnyansky District Court issued the order to close the site as a means of ensuring the suit brought by a traffic police inspector whose actions were reported by activists from Dorozhny Kontrol. This is in direct violation of the norms of the Civil Procedure Code of Ukraine which clearly states that the types of measures for ensuring a suit must be commensurate with the stated demands of the claimant.  Using such logic, are we to understand that when Dorozhny Kontrol appeals Salamon’s court order, then to ensure that appeal, the entire Desnyansky Court should be closed. That is absurd, undemocratic and dangerous!

The events described are taking place against a general reduction in democracy and freedom of speech in Ukraine, and also concern the Internet, one of the platforms for freedom of expression in Ukraine.

Stop Censorship calls on the members of the High Council of Justice to give their assessment of such actions by Judge Salamon. The MIA management should also assess the actions of its officer whose suit has led to the closure of a publication which is critical of police actions.

Stop Censorship calls on all colleagues and concealed individuals to support Dorozhny Kontrol’s struggle for its right to exist and for media freedom, informing about the situation around the site, and becoming informed in protest.