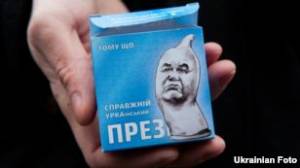 The head of the Coalition of Participants in the Orange Revolution, Serhiy Melnychenko has been jailed for 15 days for organizing Friday’s protest action on Maidan Nezalezhnosti [Independence Square] in Kyiv.  Four people would appear to have been detained by police at around midday when as part of their protest against the actions of those in power they tried to distribute condoms with an image of President Yanukovych on the packet.

The police statement claims that they were detained because they gave no notification of the planned action.

There is little clarity about the measures against the others.  Ukrainsky Tyzhden says that two others have been jailed for 15 days, but gives no names. It quotes blogger Olena Bilozerska as reporting also that an 18-year-old woman Yaroslava Pugachova and Bohdan Tytsky were given warnings.