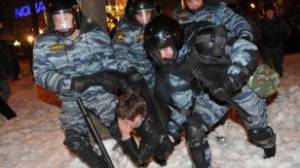 International monitors say the March 4 presidential election that swept Prime Minister Vladimir Putin back into the Kremlin was unfair, while Russian volunteer monitors denounce widespread voting fraud. Most of the alleged irregularities reported are time-tested tactics observed in previous elections. But the election also yielded some innovations.

This is the most traditional example of electoral fraud, which consists of "stuffing" multiple ballots into the ballot box. This can be done by individual voters or by polling station officials who "pad" the ballot box either before or after the vote.

Russian polling station officials also have a long history of fudging the numbers on election protocols after election monitors leave the station at the end of the day. Monitors from the Organization for Security and Cooperation in Europe (OSCE) said the vote count in the March 4 election was faulty in almost one-third of the polling stations that it observed.

In so-called "carousel" voting, people cast multiple ballots at different polling stations. Fleets of buses packed with suspected "carousel" voters were seen in Moscow on March 4. Activists from the pro-Kremlin group Nashi, among others, appeared to have been bused en masse from different cities to Moscow polling stations. The busing was so intense (the scale of "carousel" voting was "absolutely unprecedented, " according to Russian anticorruption blogger and opposition activist Aleksei Navalny) that the head of the Moscow Election Committee felt obliged to issue a clarification saying the Nashi activists were merely giving voters rides to polling stations.

This year, the "carousel" used a new technology -- people used absentee certificates to obtain ballots at polling stations while hanging on to their absentee documents, enabling them to vote again at other locations. It is virtually impossible for monitors to prove such voters cast ballots several times.

​​The Central Election Commission ran out of absentee certificates (there were more than 2 million) before voting even began.

Another innovation tested out on March 4: Fake election observers were deployed at polling stations, preventing real volunteer monitors from observing the voting (polling stations have quotas for observers). Such frauds were reported in large numbers in St. Petersburg and Nizhny Novgorod.

Under electoral law, people employed in companies that operate around the clock can cast their ballots at polling stations closest to their workplace. On March 4, such companies -- who were required to submit "additional lists" of prospective voters several days before the election -- ended up massively busing their employees to polling stations. This tactic enables employers to put electoral pressure on their staff and, in some instances, "carousel" them to several polling stations.

Some opposition monitors claim that 20 percent of ballots -- or almost 14 million votes -- were cast by voters on "additional lists" in this election.

Interestingly, a number of companies and institutions, including universities and hotels, declared March 4 a working day in order to enroll their staff on "additional lists."

A relatively new scheme that appears to have been used heavily in this election. Voters turn up at a polling station to find out that someone else has already voted for them. In one instance reported by the Russian media, a victim of such fraud in Moscow received a threatening call on her mobile phone minutes after alerting polling station officials of the irregularity.

In a bid to quell the wave of protests sparked by the fraud-marred parliamentary elections in December, Putin had web cameras installed in more than 90, 000 polling stations to ensure transparency. But the stunt failed to impress monitors as most of the cameras offered only fuzzy images of the ballot boxes.

In the city of Magadan, Internet users even claimed they were receiving "live" footage of sunlit polling stations although night had already fallen in the city.