Donbas Miners: Neither decent working conditions, nor a normal burialBlack Gold mixed with BloodYet more miners die in Ukraine’s minesUkraine’s Mines remain deadlyMiner who complained of inhuman conditions after mine disaster “transferred”Ukraine’s Miners: Put at Risk and ExploitedAnother methane explosion at a Luhansk region mineNo End to the Deaths in Ukraine’s Mining DisastersUnion blames Mine Owners for Fatal BlastRefined torment of minersReformers of the Mining Industry – Miners’ Opinion not needed?On illegal mines in the Donbass region and where the Police and other authorities are not lookingWere miners left to die after the explosion at the “Zakhidna” Mine?Organizer of illegal mine imprisonedPit No. 8: Illegal Mines in UkraineMain hero of illegal mining film savagely beatenMore victims of police protection of illegal miningPutin threatens to increase Russia’s ‘support’ for occupied DonbasUkrainians’ tolerance towards unlawful violence is increasing – human rights protectorsNo money for medics in occupied Crimea & Russia, while 15 billion spent to rubberstamp Putin’s life presidency
• Topics / Social and economic rights 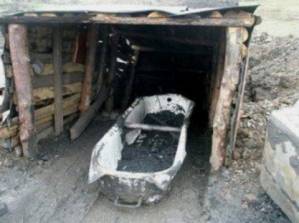 The Donetsk Regional MIA has reported that the bodies have been found of six men who died in an explosion at a kopanka or illegal mine near Yenakiyeve in the Donbas region on 29 February.  Only three had been brought to the surface at the time of reporting.

The police say that they were only informed of the accident by a local newspaper on 1 March.

A criminal investigation has apparently been launched.