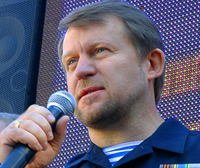 On 15 February around 200 Afghanistan War veterans deliberately snubbed President Yanukovych and other public officials by demonstratively turning their back on them. An UNIAN reporter spoke with one of the men, Oleksandr Kovalyov who also alleges that the police suggested that he leave the country. The police immediately denied any pressure on Kovalyov or the business he has a connection with.

Lana Samokhvalova from UNIAN says that a week ago she received a text message from Kovalyov’s wife saying that her husband was not in Kyiv, that she would like to discuss possible developments with the journalist.

They met in a café where Tetyana Kovalyova explained that they had been told that there were plans to arrest her husband and carry out a search of the flat, and that they might plant weapons or drugs.  They are presently preparing themselves, trying to ensure that nothing can be planted if a search does take place.

Tetyana adds that she was recently summoned by an investigator over a car accident she was involved in. Fortunately, she says, her husband was not in the country at the time.  “A forgotten case where there is a court ruling and no mutual grievances suddenly proved of interest to the police”.

Asked whether she would be happy to have journalists present at the search, as happened after a search of the central office of the veteran’s movement “Nobody but Us” following the September protests outside parliament, Tetyana answered yes, if it would help.

“A week passed. At the Donetsk business, where five searches were carried out and which for a long time Oleksandr Kovalyov was a co-owner of, the accounts were blocked and other shareholders continued to undergo “prophylactic talks”.

Oleksandr Kovalyov has still not returned to Kyiv. There is a message on the website of his organization saying that provocation is planned against Kovalyov, and that the organization is calling for general mobilization.

On skype, Oleksandr Kovalyov stressed to UNIAN that he is not a politician but a member of a civic organization fighting for citizens’ rights.  He says that there are many decent people in the MIA and that he knows that an instruction has been issued to imprison him on any pretext. He adds that information about their organization is regularly reported at MIA meetings.

He says too that some other members of the organization have been picked up and they’ve had conversations with them.

He says that they are planning to assert that he’s a drug addict, or was hold weapons. He adds that the Department for Fighting Organized Crime is following members of the organization.

“When in October there was a search of the central office of Nobody But Us, within half an hour “two hundred” Afghanistan War veterans had gathered”.

Asked why they are being subjected to pressure, Kovalyov answered that he has two versions. One – revenge over the snub on 15 February. The other – they’re frightened by the growth of “Nobody but Us”

From the interview at UNIAN