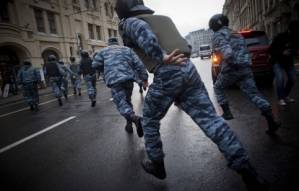 Throughout Tuesday, as third-term President Putin “asked” the State Duma to accept Medvedev as Prime Minister, OMON or riot police were out in force dispersing gatherings of entirely peaceful protesters and detaining many.

In the morning, they arrested Alexei Navalny and Sergei Udaltsov who Reuters reported were among several hundred demonstrators who’d spent the night in a park near the Kremlin administration offices.

The protests are over the swap of places between Vladimir Putin and Dmitry Medvedev following elections which were condemned as rigged by many in Russia and abroad.

OMON was out in force on Monday clearing the streets of those less than enamoured with Putin’s inauguration for a third term, after swapping jobs with Medvedev for one presidential term.

The website Grani.ru reported during Tuesday evening that the riot police had dispersed protesters from Chystye prudy (in the centre of Moscow), using rubber batons to break down the plastic sheets the protesters were using to protect them from the rain.

Mass detentions have been underway in the centre.  Around 150 people gathered near the ITAR TASS building (minutes away from the central Tverskaya St – translator) where Alexei Navalny and Ksenya Sobchak had been detained. A State Duma MP Ilya Ponomaryov stated that he was holding a meeting with voters, however the detentions continued.  Another MP, Dmitry Gudkov, was detained after getting in the police van where Ksenya Sobchak was being held.

Grani reports that dozens of people have been detained on Tverskaya St around Pushkin Square, among them journalists.

According to the website OVD.info, as of 22.45  262 people had been detained.  The site informs that the police do not show their ID nor do they provide a reason for detaining the peaceful protesters.

From reports at Grani.ru and OVD.info 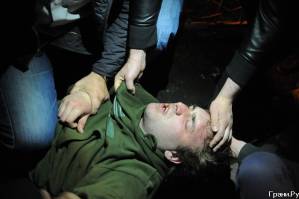