Journalists prevented from informing on infringements of Public Information Act 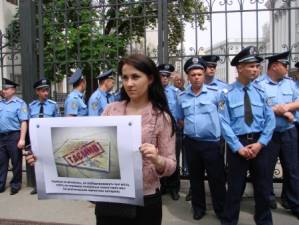 Ukrainska Pravda reports that on 8 May a number of well-known journalists and civic activists were stopped by police when they tried to enter the area on Bankova St outside the President’s Administration.  At around midday the journalists arrive at Bankova St with placards protesting against non-enforcement of the Law on Access to Public Information.  They were prevented from entering the area outside the President’s Administration by police who closed the gates and formed a human shied.

The police refused to explain their actions despite the fact that the Kyiv City Administration had been notified of the planned peaceful gathering outside the President’s Administration.

There was a scuffle when some of the journalists tried to get on to Bankova St and the police pushed them away.

The head of the Central Department for Access to Public Information, Dennis Ivanescu came out and asked if the journalists had the relevant document confirming authorization of the gathering which he was promptly shown.

There is nothing in law which prohibits people from holding peaceful demonstrations outside the President’s Administration.

After a stand-off for about half an hour the police finally opened the gates.

It was a telling episode to mark the first anniversary of the coming into force of the Law on Access to Public Information. The impeded gathering took place after a press conference where journalists made public a list of 10 topics of public importance which the authorities have refused, in breach of the Law, to make public.