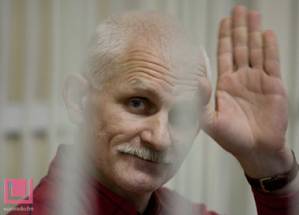 U.S. Department of State
Office of the Spokesperson
May 18, 2012

The U.S. Department of State is pleased to announce that Ales Byalyatski of Belarus and Uganda’s Civil Society Coalition on Human Rights and Constitutional Law are the joint winners of the 2011 Human Rights Defenders Award.  This award recognizes individuals or non-governmental organizations that show exceptional valor and leadership in advocating the protection of human rights and democracy in the face of government repression.

Ales Bialiatski has bravely advocated on behalf of victims of political oppression and their families despite harassment by the Government of Belarus.  As the founder of one of Belarus’ leading human rights organizations, “Viasna”, Byalyatski provided legal and practical support to victims of an on-going crackdown and acted as a key source of information about human rights violations.  He is currently a political prisoner, serving a four and a half year sentence for defending human rights.

Uganda’s Civil Society Coalition on Human Rights and Constitutional Law is honored for effectively defending the human rights of lesbian, gay, bisexual, and transgender (LGBT) individuals, often at great personal risk. The Coalition, which is comprised of 40 Ugandan NGOs, has successfully defended the rights of LGBT individuals in Ugandan courts, sparked public dialogue on LGBT rights in Uganda, and challenged widespread misperceptions and prejudices. The Coalition’s structure, effectiveness, and engagement with Ugandan civil society, government officials, and the Ugandan public provides a model for other human rights activists around the world.

This year’s nominees came from every corner of the world.  Common World and the Little Bird Mutual Assistance Hotline in China, as well as the Mutual Support Group and the Center for Legal Action in Human Rights, from Guatemala were nominated organizations, as were an impressive group of individual nominees: Jorge Molano of Colombia, Adilur Rahman Khan from Bangladesh, George Freeman from Sierra Leone, Govinda Prasad Sharma Koirala of Nepal, Swaziland’s Justice Thomas Masuku, Igor Kalyapin from Russia, Zarganar from Burma, and Zaw Min Htut, a Rohingya rights activist living in Japan.

The United States stands with these human rights defenders and civil society activists who are doing the hard work every day, in every part of the world, to make real the promise of the Universal Declaration of Human Rights.