Selective criminal investigation initiated over “Lukyanivka. Prison No. 1 programmeDetention Unit film and its possible ramificationsShocking statistics in Ukrainian penal institutionsDeath of Dnipropetrovsk remand prisoner to be reinvestigatedRussia uses same fake witnesses in multiple ‘trials’ of Crimean Tatar political prisoners Russia reverts to worst Soviet times in reprisal sentence against historian of the Terror Yury DmitrievNew Russian offensive to deprive imprisoned Russian Historian of the Terror Yury Dmitriev of his lawyer 2020: There was no worse year in the realm of human rights after the Revolution of DignityA brief description of the KHPG strategic litigations in July–December 2020Is COVID-19 present in penitentiaries and pre-trial detention centers?Russia begins its most repressive trial of Crimean Tatar journalists and activistsThe practice of application of Article 111 of the Criminal Code of UkraineBrutal torture of gravely ill Crimean Tatar political prisonerPost-Maidan Tale of ImpunityReprisals swift after former Crimean Tatar political prisoner takes Russia to courtAlibi confirmed of man whose arrest for a child’s murder triggered appalling anti-Roma riotsFormer political prisoner takes Russia to court over torture conditions in Crimean prisonUkraine arrests Crimean turncoat implicated in persecution of Crimean TatarsThe final brutality in Russia’s war against Crimean Tatars in occupied CrimeaViktor Lozinsky, the ex-MP convicted of murder, wins in local elections in Ukraine
• Topics / Law enforcement agencies
• Topics / Penal institutions

One of the people in the journalist programme “Lukyanivka. Prison No. 1 beaten up 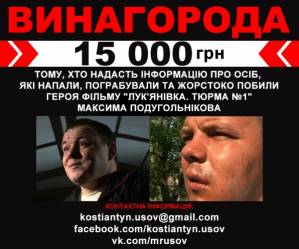 Kostyantin Usov, TVi journalist and producer of the programme “Lukyanivka. Prison No. 1” has posted a blog on Ukrainska Pravda in which he offers a 15 thousand UAH reward for information about the people who attacked one of the people in his film. As reported, the film which caused a furore when it first appeared on TV (and the Internet) gives a highly unflattering view of the Lukyanivsk SIZO [Detention centre] in Kyiv.  Usov shows the conditions of the SIZO in which Yulia Tymoshenko was held until the end of last year, and in which Yury Lutsenko is presently imprisoned. Their conditions however are unlikely to have been similar to the filth and squalor in Usov’s programme. The journalist also reveals how inmates can only improve their conditions through payment of bribes – from 400 UAH to have a mobile telephone brought in to 300 USD for a prostitute.  For a much bigger amount, they can be moved to better conditions.

Usov writes in his blog that on 9 May, around 18.00, one of the people he showed in the film, Maxim Poduholnikov, was set upon at a railway station in the Kyiv region by 5 men. Two stood guard while three beat him up brutally.

Maxim asked what they were doing it for, and the assailants asked what he and Usov had done.

Usov writes that left in a pool of blood, Maxim Poduholnikov called the police.  The police who arrived – from a Berkut riot police unit who happened to be the nearest patrol, did not even question witnesses.  Usov asserts that they took Maxim to the police station in Irpin where they proceeded to beat him, to force him to decide against reporting the crime.

“Almost a month has passed and those responsible have not been punished, and not even identified. So if it’s useless to rely on the police, we need to act alone.

THIS IS A FORMAL ANNOUNCEMENT OF A 15 THOUSAND UAH REWARD TO ANYBODY WHO PROVIDES INFORMATION ENABLING THOSE INVOLVED IN THIS CRIME TO BE IDENTIFIED AND PUNISHED.