What’s so secret about city plans?2020: There was no worse year in the realm of human rights after the Revolution of DignityInvestigation of individual terrorist crimesA brief description of the KHPG strategic litigations in July–December 2020Is COVID-19 present in penitentiaries and pre-trial detention centers?Prisoner exchanged for Ukrainian hostages gets 17-year sentence in Russian proxy Luhansk ‘republic’The practice of application of Article 111 of the Criminal Code of UkraineCriminal proceedings under Article 111 of CC of Ukraine against the journalistsPost-Maidan Tale of ImpunityRussia: New legislative initiatives: a threat to NGOs, freedom of assembly, education and moreRussia prevents jailed Crimean Tatar activists facing 20-year sentences from learning what they’re charged withRussian legislators launch multiple hits against civil society in occupied Crimea and RussiaTotal impunity for Ukrainian politician suspected of involvement in killing of journalist SerhiyenkoUkraine sabotages reintegration chances for students from occupied Crimea and DonbasOpinion on the political motives of criminal persecution and violation of human rights in the case of Sergiy PashinskyUkrainian soldier Vitaly Markiv acquitted and freed in Italy!Head of Ukraine’s Constitutional Court concealed illegal purchase of land in Russian-occupied CrimeaPutin’s Russian passport aggression against Ukraine fizzles in occupied DonbasInternational human rights defenders find critical failings in Italy’s trial & 24-year sentence of Ukrainian soldier MarkivAppeal begins in Italy against shocking 24-year sentence of Ukrainian soldier Vitaly Markiv
• Topics / Access to information 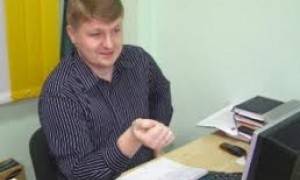 Volodymyr Torbich, Editor of the Rivne Journalist Investigation Agency, is certain that if the media sought access to public information through the courts and Prosecutor, officials would learn more quickly to respect the Law on Access to Public Information.

In October 2011 he lodged a civil suit against the municipal newspaper of the Rivne Regional Council over concealment of information. He is asking the court to declare unlawful the newspaper’s refusal to provide information about taxpayers’ expenditure on maintaining munical media and to order the Editor of the paper to give the information.  The case at the time Mr Torbich gave an interview to the Institute for Mass Information had not ended, and was being examined by the High Administrative Court.  He notes that in the first instance court he basically received half of the information he had been seeking by virtue of the fact that the respondent was asked for the information by the court.

However the first instance court terminated proceedings deeming that the case was not subject to examination in an administrative court. It reached this conclusion since it turned out that the municipal newspaper “News of the Rivne Region” is not funded through a separate item in the budget, but via various structures of the Regional Council.  Thus, although it is money from the budget which is spent on the newspaper, the court decided that according to the Budget Code, this was not budget-based funding. Since that was manifestly idiotic, he says, they lodged an appeal which was rejected. They are not hoping that the High Administrative Court will provide a satisfactory resolution of the issue. If it doesn’t, their lawyer is proposing to take the case to the European Court of Human Rights. The newspaper is clearly being maintained by public funding and taxpayers have the right to know how effectively their money is being spent.

They will also be sending another information request to the Regional Council since the latter responded to their previous request by providing only partial information, and sending them to the newspaper as a separate legal entity for other information.

They also approached the Prosecutor’s Office but the latter found no infringements in the behaviour of the newspaper’s editor.  He says that he appealed against this to the Prosecutor General’s Office, but they sent the complaint back to the Regional Prosecutor, i.e. effectively to those the complaint was about.

They received legal assistance in court from Oleksandr Burmahin of the Institute for Regional Press Development, to whom they’re very grateful. They were also provided with consultations from two media lawyers from the same Institute.

They have had successes in the past. In 2008 the Rivne City Court ordered the Rivne Department of Land Resources to provide information, namely a list of people trying to receive plots of land in Rivne.

In 2010 they took the Rivne Police to court over failure to provide information, but the police backed down after the first hearing and provided the information.

They are presently at appeal stage in a case against the Rivne Regional State Administration and several of its departments over concealment of information about bonuses received by officials.

They have filed a suit against the Lutsk City Executive Committee which refused to provide information about Lutsk residents who received publically funded flats. With respect to this case, they also complained to the Prosecutor who ordered the officials to provide this information.  They are planning a suit against the Dean of the National University of the Water Industry and Use of Natural Resources, also over refusal to give information about who received publically funded accommodation. In this case the Rivne City Prosecutor has not responded properly.

“I believe that if even 10% of media publications did not give up and insisted on receiving access to the public information which the authorities were refusing to provide by approaching the court and the Prosecutor’s Office, officials would learn more quickly to respect the Law on Access to Public Information”