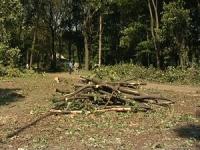 n the course of several nights a huge number of trees have been felled in the forest area of Gorky Park.  A belt of trees running parallel to the new road and much wider than during the illegal felling in May-June 2010 have been cut down.  The trees are all being felled and the area is obviously being cleared.

Environmentalists caught initially unaware by the work carried out at night say that the area being cleared would be sufficient to build several cottage complexes and its location correspondents to the original development plan for luxury apartments and entertainment complexes along the new road.

The trees were felled at night and the workers who have now begun taking them away say that they don’t know who cut them.  They also refuse to say which organization they represent.

The people running nearby tennis courts also deny any connection to the destruction.

The Mayor’s office would not comment as to who is behind the tree-felling.  The environmental activists called police officers who arrived, took their statement, and then spoke with an unidentified man who had arrived in support of the workmen and then left.

The environmentalists are concerned that this may be the beginning of major construction work. They say that as well as the main cleared area, there are also isolated trees felled along the entire new road and suspect the worst – that the Kharkiv authorities are now setting about implementing their plan from 2008 which they were forced then to back off.  As reported, this suspicion remained strong during the scandalous tree-feeling and crushing of peaceful civic protest in the summer of 2010, with the new road seen as a pretext.

Following the public outcry and international response to those events, Kharkiv’s Mayor Kernes and Governor Dobkin promised that nothing would be built other than the road.

Photo and information from ATN