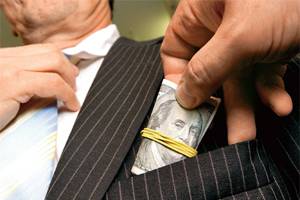 In the midst of conflict over the language law effectively making Russian a de facto official language, the ruling majority has succeeded in massively reducing public control on how taxpayers’ money is spent..

On 4 July 241 votes passed in its second reading and in full № 9634  “On Amendments to Some Legislative Acts on Public Procurement”.

The law waives tender procedure for a considerable amount of public procurement and allows information to not be divulged about such procurement.

The draft law envisages the exclusion from the Public Procurement Act of tenders for State controlled enterprises which are carried out at the expense of the specific enterprise.

The law was adopted without discussion after a minute-long address by Oleksy Plotnikov from the Party of the Regions. It will come into force as soon as President Yanukovych signs it and it is published.

According to Lesya Orobets from the opposition BYUT faction this is about the “legalization of uncontrolled plundering of 250 billion UAH of public funding which will not be recorded even in the Herald of Public Procurement. If the law comes into force nobody will ever know about agreements, their size or about the end recipients of your money and mine”.

According to the website “Nashi Hroshi” [Our Money], in 2011 the Public Procurement Herald announced State tenders for 373, 43 billion UAH, this being a quarter higher than the State budget. During the first 6 months of this year the Herald has published announcements for tenders worth 307.75 billion UAH.

Last year the Verkhovna Rada also moved in the direction of concealing public procurement. On 17 May 2011 the Law on Amendments to Some Legislative Acts on Public Procurement was passed with this reducing the grounds for publication of tender documentation and therefore making public access to it more difficult (draft law № 7532