Illegal tree-felling and other work are continuing in Kharkiv’s Gorky Park.  As reported, a new wave of destruction began around 20 June, with around 200 trees destroyed.  There are no permits for the felling and it was largely down at night. They are now laying foundations for some strange constructions.

At around 16.00 on 12 July the workmen whom the Park’s Director Pozdeyev has on previous occasions identified as his staff felled 20 trees near the tennis courts. All of the trees in that are where the illegal felling was taking place had been marked and recorded by Zeleny Front. Of the 20 cut down, 19 were perfectly healthy trees.  Some were up to 100 years old.

Felling took place on the same day in two places with around 20 trees cut down in each.  Zeleny Front is adamant that this was not regular forestry maintenance.  The reasons are many:

Zeleny Front activists have been keeping vigil at the park.   By early evening there were a number of activists who called the police to the second of the two sites. The police took a long time coming, and while some of the activists went to meet them, four remained near the tennis courts.

Journalist Ihor Hudenko and lawyer and human rights activist Yevhen Solovyov moved closer to the site of the illegal tree-felling to see in more detail what was going on.  They give a number of details which, together with the clear lack of any planning and other permits, make it entirely clear that the whole procedure is illegal.

One of the workmen came up to Yevhen Solovyov and deliberately wiped his cement-caked hands on Yevhen’s shirt.  When the latter told him not to do it, THREE workmen attacked him, pulled him to the ground and began kicking his head and body. FOUR others went for the journalist, trying to grab his video camera. They grabbed him by the shoulder, then throat, choking him. Fortunately there were two others nearby who came running up with big sticks, and the thugs attacking the two men fled.

The police arrived within 10-15 minutes since they’d been called anyway, but the ambulance took about 40 minutes to get there.

The police have taken all the details of the attack. The Zeleny Front people and Kharkiv Human Rights Group will be following what happens next.

From a much longer report on the Zelony Front site 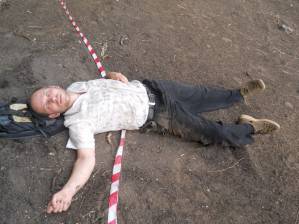