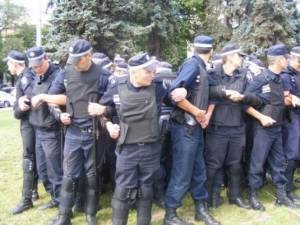 The ban on political protests on Soborna Square in the centre of Cherkasy, originally imposed from 16 July to 10 September has now been extended up till 7 October.  One can pessimistically assume that the court will not then recall citizens’ constitution right to peaceful assembly and that the ban will be extended further.

The new ban was sought by the Cherkasy Regional Council.  The application stated that cultural-artistic, sport and exhibition-market events were planned on the square. The council claimed that the simultaneous holding of such events and “rallies, demonstrations and other peaceful gatherings could lead to open confrontation, infringement of public order and safety of the public”.

Leonid Datsenko, Coordinator for the United Opposition in the Cherkasy oblast, says that the authorities are using any means to ban the opposition from holding demonstrations on the central square in Cherkasy. He says that for two months before the 2010 Local Elections there was a football area on the square, then after they dismantled a protesters’ camp in defence of the Ukrainian language (and against the language law on 6 July – translator) they had a market with things for school.