Pit No. 8: Illegal Mines in UkraineMore victims of Donbas’ illegal minesDonbas Miners: Neither decent working conditions, nor a normal burialBlack Gold mixed with BloodYet more miners die in Ukraine’s minesUkraine’s Mines remain deadlyMiner who complained of inhuman conditions after mine disaster “transferred”Ukraine’s Miners: Put at Risk and ExploitedAnother methane explosion at a Luhansk region mineNo End to the Deaths in Ukraine’s Mining DisastersUnion blames Mine Owners for Fatal BlastRefined torment of minersReformers of the Mining Industry – Miners’ Opinion not needed?On illegal mines in the Donbass region and where the Police and other authorities are not lookingWere miners left to die after the explosion at the “Zakhidna” Mine?PACE finalizes capitulation to Russia, while listing all reasons why this is appeasement Not just Navalny. EU sanctions needed over 18-year sentences against Crimean political prisoners Крим: З 2014 року до російського війська призвано 28 тисяч жителів півостроваCrimean Tatars sentenced to 18, 17 and 13 years for discussing their faith and Russian persecution 80-year-old Ukrainian charged with trying to overturn the government via a Facebook repost
• Topics / Chronicle 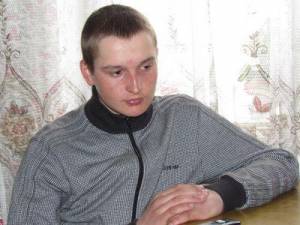 One of the two young heroes of the harrowing film about illegal mines or “kopanki” in the Donbas region, “Pit No. 8, Yura Sikanov” is in urgent need of an operation after being brutally beaten with baseball bats in his home town, Snizhne (Donetsk oblast). The attack took place at the end of October, and Yura has already undergone two operations, but the damage to his jaw is serious, and he needs steel implants. The amount of money involved is, by western standards, small (around 1200 EUR), but is quite prohibitive for the young man who is only now 19.

Yura, and his brother, were working in the illegal mines which in an area of serious poverty provide virtually the only possible work. These mines normally come to the public eye only when a disaster cannot be hushed up (See Black gold mixed with blood).

However they captured public attention in March for a different reason, directly connected with Yura Sikanov and another young man, Dima (now 22), the heroes of the documentary film “Pit No. 8”. Yura’s father committed suicide, his mother is an alcoholic, and Yura provided for himself and two sisters by working in one of the kopanki.

This was not the message from the film’s producer nor its main heroes – Yura and Dima – who came to Kyiv as very special guests of Docudays.UA. The film had already been shown at 30 festivals and been well-received, with many prizes to its name. It was in Ukraine that they encountered problems, and major ones, with a co-producer suddenly announcing that the film was nonsense and pure fiction.