Enforced Silence: From Kyiv to Siberia 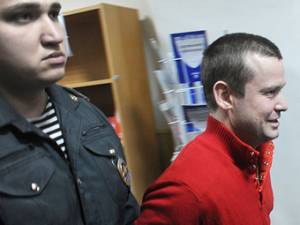 As feared, Leonid Razvozzhaev, the Russian Left Front activist abducted while applying for asylum in Kyiv, has been sent to a SIZO (remand unit) in Siberia.  Officially this is to face charges over an alleged crime in 1997.  However that criminal investigation was reinstated on almost the last day before it was to become time-barred after 15 years and is unrelated to the charges laid on Razvozzhaev’s forced return to Moscow. It seems likely, therefore, as his defence lawyers suggested from the outset, that the aim is to put pressure on him while impeding contact with his lawyers – and attention from the media.

At present Valery Borshchev from the Russian Public Supervisory Council has confirmed that Razvozzhaev was taken from the Moscow SIZO on 18 December, but does not appear to have arrived yet in the Irkutsk oblast.

His lawyer Dmitry Agranovsky says that they fear that the investigators will try to force him to confess to the 1997 offence which he has always denied. Agranovsky told Interfax that Razvozzhaev  had told him to not believe any more claims about supposed confessions.

The relatively good news that a Moscow court has slightly shortened the sentences of two other Siberian exiles – Mikhail Khodorkovsky and Platon Lebedev – is outweighed by the serious charges brought against Alexei Navalny, the anti-corruption campaigner and Putin’s most serious opponent, as well as the measures against Razvozzhaev, Udaltsov and Lebedev.

While all of these cases are of the greatest concern, Ukraine’s role in the abduction of an asylum seeker makes the situation with Razvozzhaev especially shocking.

Interfax reported Agranovsky as saying that the Kyiv Prosecutor’s Office has instructed its investigators to look into the abduction of Razvozzhaev.  It is unclear where his information is from and what measures (if any) the Prosecutor’s Office is taking.

Ukraine’s Interior Ministry has already formally stated that it will not be launching a criminal investigation into the events, and thus far the Prosecutor General’s Office has only confirmed that there was no extradition request with regard to Razvozzhaev and that he made no complaint when crossing the border into Russia from a crossing in the Kharkiv oblast.

Ukraine’s Human Rights Ombudsperson, Valeria Lutkovska may have demanded information from the relevant authorities back in October. If so, she is now silent over a situation which Human Rights Watch quite understandably called profoundly shocking.

Leonid Razvozzhaev had stepped out of the Kyiv office of a UNHCR partner organization where he was applying for asylum at midday on 17 October when he was abducted.

The Ukrainian authorities said nothing.

Razvozzhaev was next seen in a Moscow court two days later where a judge remanded him in custody initially for two months.

The charges then were over organizing mass riots.  These are based on the second part of a questionable anti-opposition documentary shown on the pro-Kremlin NTV channel.

The investigators claimed that Razvozzhaev had “handed himself in” and confessed.  He, however, was able to shout from the courtroom that this was not true.  He has since retracted the confession which he says was made under immense pressure which included threats against his wife and children.

Presumably the investigators felt the need to consolidate the nebulous charges based on a television programme.  They have asserted that Razvozzhaev crossed the border into Ukraine using his brother’s passport.  Since he was not under any restraint measure at that time, this would surely be an issue for the Ukrainian authorities, not the Russian. In fact, there is no confirmation of this, and he certainly had his correct passport with him since this was used for the forced return.

Then the investigators brought up the 1997 criminal case, with Razvozzhaev accused of having taken part in an armed attack on a Siberian fur dealer and theft of 500 fur hats and video camera.  There is a positively Soviet ring to the way the investigators have responded to understandable scepticism about the reinstatement of a 15-year-old case.  They claim that the wife of the fur dealer contacted the relevant authorities expressing indignation that nobody had been prosecuted.

One of Razvozzaev’s lawyers reported recently that the European Court of Human Rights has applied Rule 40 (urgent notification of an application) with questions put to the Ukrainian and Russian authorities.

Whether or not the Ukrainian authorities took an active part in Razvozzhaev’s abduction and forced return to Russia is not clear. How could it be when all are mute, and hoping – like their Russian counterparts – that the case will be forgotten?   This must not happen.