Organizer of illegal mine imprisonedMore victims of Donbas’ illegal minesDonbas Miners: Neither decent working conditions, nor a normal burialBlack Gold mixed with BloodYet more miners die in Ukraine’s minesUkraine’s Mines remain deadlyMiner who complained of inhuman conditions after mine disaster “transferred”Ukraine’s Miners: Put at Risk and ExploitedAnother methane explosion at a Luhansk region mineNo End to the Deaths in Ukraine’s Mining DisastersUnion blames Mine Owners for Fatal BlastRefined torment of minersReformers of the Mining Industry – Miners’ Opinion not needed?On illegal mines in the Donbass region and where the Police and other authorities are not lookingWere miners left to die after the explosion at the “Zakhidna” Mine?Ukrainian Mines becoming even more dangerousMiners forced to begin major protest – for their wagesAkhmetov’s miners go on strikeIllegal mine resumes work after fatal accident and police look the other wayMain hero of illegal mining film savagely beaten
• Topics / Social and economic rights 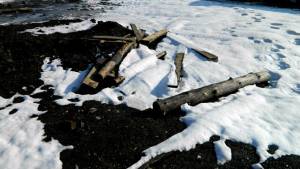 Stanislav Kmet reports that at the kopanka (illegal mine) in Horlivka [Gorlovka from the Russian] work has resumed just a week after a 26-year-old miner died there on 1 February. The journalist arrived at the site to take footage for his report and found people pouring coal into bags near the “hole”.  They called themselves  guards and said that they knew nothing about what had happened a few days before. Later, however, without the cameras, they did give him information about the organizers of the illegal mining, responsible for a man’s death.

The death of this miner working illegally in Horlivka is just one of several accidents at Donetsk kopanky since the beginning of the year.  It gained prominence before the specific lopanka is in a heavily populated area and people have repeatedly told journalists and police about it.  No reaction from the latter with the Horlivka police including the head of police, Pavel Panasyuk,   who pretend they know nothing about the illegal mining and claiming that the organizer of the kopanka was the man who died.

The author quotes a few of Panasyuk’s denials and says that a visit to the site makes it quite clear how little relation they have to the truth.

The mine that once stood there was closed down back in Soviet times, and nobody thought that men would ever go down there again. Unfortunately this is now happening.  There were a number of kopanky with some of them now filled in.  One however, where the man died, is continuing to work.

All men working there are silent about the colleague who was killed. The author writes that they have clearly been instructed to keep their mouths shut by the owners of the kopanka.  They get irritated at questions about the dead man and about the owners, and repeat that they are guards.

One of the men did agree to talk on condition of total anonymity.  Various names are given, and it seems likely that the head of police is very deliberately looking the other way and denying the existence of the kopanky.

The mines are exceptionally dangerous because they are illegal meaning that no safety checks etc are carried out.  In areas of poverty, those prepared to risk men’s lives will unfortunately find people desperate enough for work to accept such conditions.