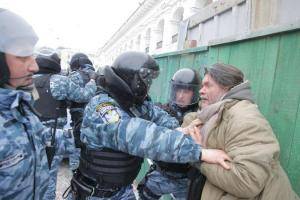 Judge Keleberda of the Kyiv District Administrative Court has banned any protests or rallies outside Hostynny Dvir, the landmark in central Kyiv which is currently undergoing controversial reconstruction work.

The judge ruled that Hostynny Dvir is a monument which is being reconstructed by Ukrrestavratsiya, and that protests will disturb the work. This he asserts could lead to injuries, and cause losses to Ukrrestavratsiya which lodged the suit.

The respondents were VO Svoboda and Civic Position.

Svidomo reports that on 2 March at 13.000 civic activists, musicians, and all those concerned about the fate of Hostynny Dvir are planning to hold a concert rally in defence of the building.

Judge Keleberda’s assessment of the situation is not shared by those protesting the development work.

In August 2011 Prime Minister Azarov signed a document which removed Hostynny Dvir from the list of monuments under State protection.

Despite the name, Ukrrestavratsiya is a property developer which according to Kyiv Post is owned by the Cyprus-registered Afidreko Holdings Limited,   With the carte blanche issued by Azarov’s government, the Kyiv City Administration has issued a permit to the property developer to make the site into a shopping and office centre.

Protesters first occupied the courtyard of the monument in May 2012 and protest is continuing.