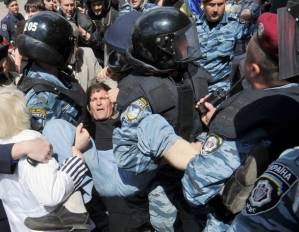 The bans can seem simply absurd, but are always enforced, with riot police, detentions and often gratuitous force (Photo from Reuters)

Members of the Partnership “For Freedom of Peaceful Assembly” have issued a list of the TOP 6 court orders which violated the right to peaceful assembly.

The Kharkiv District Administrative Court in Ruling No. 25872222 from 6 September:

It should be noted that the above-mentioned event is planned during the winter period (in conditions of low air temperature) and as a result, the use of heating devices is possible.

In accordance with the Fire Safety Regulations in Ukraine registered by the Justice Ministry on 4 November 2004 as No. 1410/10009 p.5.2.11, the use of temporary stoves in premises is not normally allowed. Lighting fires, burning waste, packaging; throwing out burning coal and ash within 15 metres of buildings and constructions, as well as within limits imposed by building norms against fires, is not allowed (p. 4.1.20). Buildings, structures, premises, technological installations must be provided with primary means for extinguishing fires (p. 6.4.8).

In addition fire safety in holding such events inside a city requires the distraction of a considerable number of personnel from the Emergencies Ministry and the production of the relevant permits.

“The court considers that the holding of a protest near the Mykolaiv Regional Prosecutor’s Office during which it is planned to hold a portrait of the Prosecutor of the Mykolaiv oblast V. Haltsov upside down with the portrait then thrown into a rubbish bin breaches the moral principles of democratic society, poses a real threat of disruption of public order; protection of health or morals and defence of the rights and freedoms of other individuals, and the given actions can also lead to disturbances between members of the protest and other individuals”.

The Mykolaiv District Administrative Court Ruling No. 25440043 from 6 September 2012

“On 14.02.2012 the Mykolaiv City Council’s Executive Committee received an application – notification PERSON _ 4 on holding a protest “Burning the portrait of the City Mayor PERSON _6 and the Head of the Housing and Communal Services Department PERSON_7 “ aimed at expressing protest over the actions of public officials.

The court considers that if the actions indicated in the application – notification of the respondent are carried out, there is a danger of disturbances since the given protest will be carried out in a manner dangerous to health and influence on the psyche of people and of the organizer himself”.

The Ruling of the District Administrative Court in Kyiv which banned peaceful gatherings from 4 to 9 July in the centre of Kyiv, including the protest outside Ukraine House against the Kivalov – Kolesnichenko Language Law.

One of the reasons for banning peaceful gatherings in Kyiv at the beginning of July was the marking of US Independence Day. The court referred to the importance of this festive day and “the real threat of terrorist attacks”. “The US Embassy in Ukraine … sent a letter to the Kyiv City State Administration in which it asks it to expedite and ensure a ban on public events and demonstrations by other organizations around the residence of the US Ambassador”, the court ruling stated.

“The norms of Law No. 3206-VI do not envisage the right of the public to hold peaceful gatherings as a measure to prevent and counter corruption.”