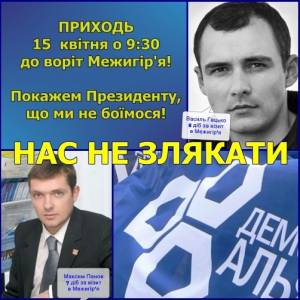 The Democratic Alliance has issued a stated in which it demands from Ukraine’s President that its activists – Maxim Panov and Vasyl Hatsko – are released and those judges, police officers and officials guilty of the lawlessness (which led to their detention and jail terms of seven and five days, respectively) are punished.

“We also call on each Ukrainian citizen to act.  To overcome your fear or indifference and give freedom and rights a chance of fulfilment..

We will not give a corrupt regime the chance to make human rights violations the norm in Ukraine.  We therefore call on each person to action – within the law but real action.

Democratic values and implementation of the law; respect for the individual as the highest value in the state; transparent democratic procedure and officials who work for the people, and don’t rob them – all of this must become the situation in Ukraine.

The Democratic Alliance will seek to achieve this. Join us.