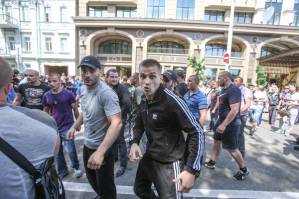 Unlike administrative resource, thugs and cynical rhetoric, imagination was in short supply with those who thought up the 18 May “antifascist demonstration” in Kyiv.  Credibility was quite simply lacking.  It wa difficult not to suspect that the police had received prior instructions when they estimated the number of “antifascists” brought out by the ruling Party of the Regions as 10 times higher than the participants in the opposition “Rise, Ukraine!” rally (44 thousand against 4 thousand).  As well as when they watched on while an “antifascist” lout beat up a woman journalist and cameraman.

Even if those in power were not actively trying to provoke trouble in Kyiv - as well as at the remembrance events in Simferopol to mark the 69th anniversary of the Deportation of the Crimean Tatars - they showed irresponsible indifference to people’s safety and inability to use democratic methods when faced with diverging views.

They also did it stupendously badly.

The “antifascist” card has been part of the current Administration’s line since Yanukovych came to power, but it really took off after the rightwing VO Svoboda party gained over 10% of the votes in the parliamentary elections.  The obvious mileage the Party of the Regions has been extracting from that victory and from VO Svoboda’s coalition with the opposition Batkivshchyna and UDAR parties can only fuel suspicions that covert support may have been given VO Svoboda.  There is a cynical logic to such support since, at very least, votes for VO Svoboda steal votes from other opposition parties, not from those in power.   At best – for a ruling party doing hopelessly badly at holding on to ever-dwindling support  – VO Svoboda’s popularity creates the only binary thinking where the Party of the Regions are cast as defenders of the good.

While VO Svoboda ideological consistency does not make its bigoted views any more palatable, the Party of the Regions is still onto a loser.  The old Soviet rhetoric being regurgitated was once part of a need to concentrate on the War and “fight against fascism” because reality had stripped all communist myths of any credibility.

The Party of the Regions does not really have any ideology and even with near total monopoly of the media, the series of “anti-fascist” rallies around the country from 14 May ending with Saturday’s rally could not convince anybody.  The slogan “Into Europe without fascism” is embarrassingly absurd since it is the ruling party’s insistence on politically motivated prosecution of the opposition and assault on other democratic rights that have placed European integration in jeopardy.

Nor do the words “without fascism” bear close scrutiny.  The over-use of enforcement bodies and courts seen in the last three years in preventing peaceful assembly and repressive measures against dissent suggest a very specific understanding of “antifascism”.  One of the most vocal “antifascists” – MP Vadim Kolesnychenko – is also the author of a bill prohibiting “promotion of homosexuality”.  This latter term is as meaningless as the claptrap about antifascism while not making the initiative any less dangerous.

This danger was stressed in a statement issued by the Association of Jewish Organizations and Communities of Ukraine [Vaad] and the Congress of National Communities.  They write that the “anti-fascist” demonstrations are aimed exclusively at discrediting the political opposition by pushing associations between historical fascism and the party VO Svoboda as well as all parties in opposition to the current regime”.  Their warning is unequivocal: the organizers of the “antifascist” events will bear responsibility for any provocation and escalation in tension..

Thankfully there was no major trouble however the authorities can take no credit for this.  The above-mentioned assault by thugs on two journalists is highly indicative.  Olha Snitsarchuk from TV Channel 5 and Vladyslav Sodel came under attack when trying to film around 10 burly louts beating up some VO Svoboda supporters.  The police simply looked on despite calls for help.

The ruling party’s “antifascists”, judging from reports around the country included a very large number of public sector workers forced to attend for free and people offered money to be present.  They also included the sort of thugs who gave fascism its deservedly bad press a long time ago.

It is perhaps well that the Party of the Regions have shown themselves to be so unconvincing since all such attempts to blur the real meaning of fascism and neo-Nazism for political gain are highly dangerous.  Power, however, is in their hands at present and their total disregard for what – and who – can be placed at risk is immensely disturbing