Interior Minister blames opposition for attack on journalistsMore condemnation of police inaction as journalists attackedJournalists protest over „antifascist” assaults and police inactionDangerous “antifascist” cardThugs assault journalists while police look onOn the danger and cynicism behind the “anti-fascist” events planned for 18 MayUses and abuses of far-right electoral gains in UkraineDangerous AllianceDividing TacticA High price for disillusionmentFor those who couldn’t returnThe Limited Force of Fine WordsTerrible DeceitTrial by HeadlineOthersWithout labelsFirst day, first brawl in trial of Vadim TitushkoStop Censorship vows to make the authorities investigate attack on journalistsBrovary journalist beaten unconscious during protestUHHRU On the events before and on 18 May
• Topics / Freedom of expression
• Topics / Freedom of peaceful assembly 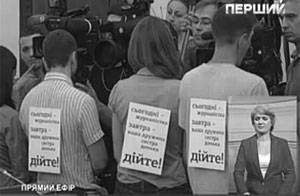 The government can’t get anything right.  On Wednesday a group of journalists staged an entirely peaceful protest during the opening of the Cabinet of Ministers meeting.  They had placards on their back with the following words: 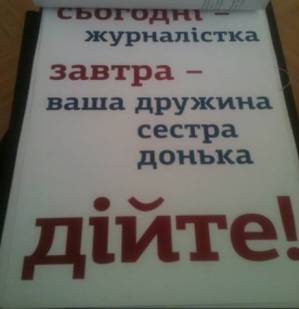 Prime Minister Azarov’s response was to throw them out and get them stripped of their accreditation. He claimed that they were turning the Cabinet of Ministers meeting into a “circus”.

This is an interesting point of view given the background to this peaceful protest as well as the latest developments on the investigation, or other, into the assault which prompted the protest.

The journalists on Wednesday were reacting to the physical assault on their colleague Olha Snitsarchuk and her husband, Vlad Sodel.

On 18 March the two journalists approached a group of VO Svoboda supporters coming under attack from around 50 athletic looking thugs.  Some of the latter first turned on Vlad Sodel when they saw him taking photographs then one began attacking Olha Snitsarchuk.   The police just stood and watched, ignoring requests for help (and the very obvious need to intervene).

showed a video in which this same alleged assailant, Vadim Tytushko, supposedly while still at liberty gives his account of the situation and asserts that he was hired to “protect the opposition”.

claimed that the problems had been caused by athletic young men hired by the opposition.

This fails to explain a number of things, not least, why in that case the thugs were attacking members of the opposition VO Svoboda party.

Skepticism is also aroused given the use of the charge of “hooliganism” only, and the fact that the main suspect was on Wednesday released on a relatively small bail following a court hearing which a Livy Bereh photographer present called “top secret”.  Remand in custody is notoriously common in Ukraine and the list of people who have now been in custody for lengthy periods despite any obvious justification is very long.  Bail on the other hand is most unusual.

As reported, the Party of the Regions organized rallies last week under the banner “Into Europe without fascism”.  The banner contained more rhetoric than substance, and was clearly aimed at  trying to paint the opposition, which now includes the right wing Svoboda party as “fascists”.  The opposition was planning its final “Rise Ukraine” for Saturday.

It has become near standard these days for the Kyiv State Administration and / or police try to have peaceful gatherings banned, often on the pretext that there could be trouble between groups holding opposite views.  There were no such attempts to stop the “antifascist” event in Kyiv.   There were numerous reports, however, throughout the country of police, traffic police etc using pressure, the new named railway cards, etc, to prevent opposition supporters from getting to Kyiv.

Throughout Saturday photos or information were posted on the Internet, with a number of them identifying the “antifascists” as members of football clubs, sports clubs known for hiring people out as so-called “guards”.  More details can be found in the links below.