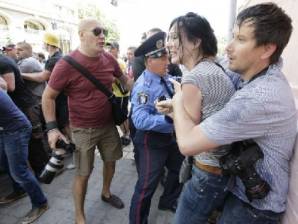 The first hearing took place on Monday in the trial of Vadim Titushko, the young man accused of assaulting Olha Snitsarchuk, Channel 5 journalist, during the events in Kyiv on 18 May.  As reported, the Party of the Regions organized “antifascist” rallies on that day as a counter to the opposition “Rise Ukraine” rallies.

During that afternoon, slightly away from the opposition rally Olha Snitsarchuk and her husband, Vladyslav Sodel a Kommersant Ukraine photographer stopped to photograph what appeared to be a group of thugs beating up members of the VO Svoboda Party.  Sodel’s camera clearly annoyed the assailants who hit out at him.  One is videoed attacking Olha Snitsarchuk.  Both she and her husband asked the police for help.  The latter watched the assault without intervening.

The outrage that followed meant that the main suspect – Vadim Titushko – was arrested and charged with „hooliganism”.

Questioned in parliament over the assault, Interior Minister Zakharchenko showed a video, supposedly made before Titushko was arrested in which he asserts that he was hired to “protect the opposition”.  This fails to explain why in that case the thugs were attacking members of the opposition VO Svoboda party.

The publicity over the incident brought to the fore questions regarding the use of hired thugs for provocation at demonstrations and civic protests.

Titushko was promptly released on bail which, unfortunately, in Ukraine remains relatively unusual.

The hearing was adjourned to 10 July due to the non-appearance of a witness.

The court did however question a LIGA-Businessinform journalist, Natalya Tarasovska who stated that Titushko was among the people providing security around the Party of the Regions stage on 18 May.  After that, she says, they left European Square and headed towards Velyka Zhytomirska.

“They were organized and carried bottles of water, from one of which as you can see on the videa they sprayed Olha Snitsarchuk.”

She also said that she had seen Titushko kick Olha Snitsarchuk on the side and tried to wrest the video camera off Vladyslav Sodel.

A police officer, Hromsky, also gave testimony. He asserts that he went up to the place, saw the two journalists sitting by the wall and drove the people away, then going off to another scuffle. He claims to have not directly seen the journalists assaulted.

Titushko faces up to 4 years imprisonment if convicted. Two MPs – Petro Poroshenko and Yury Stets came to the session. Outside a group supporting Titushko provoked a  brawl during the hearing.

New information from reports at Ukrainska Pravda and Telekritika