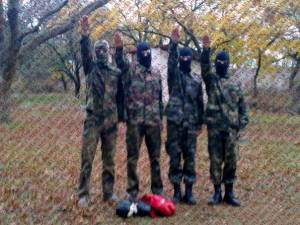 A “seminar” planned in Kyiv on 28 July by a head-bashing, bodybuilding Russian neo-Nazi, Maxim Martsinkevich, says it all about the ruling party’s zealous “anti-fascism”.  Party of the Regions MP Vadim Kolesnichenko and others use any opportunity including, most cynically, the 70th anniversary of the Volyn Tragedy, to trumpet about a mounting “fascist” threat in Ukraine.  That threat however, in their rendition, is presented as solely linked with their political opponents from the rightwing VO Svoboda party.

Maybe political expediency has blinded them to other overt dangers.  Or conceivably, deflated by the PR fiasco on 18 May when thugs, apparently hired to guard Party of the Regions “anti-fascists” assaulted a woman journalist, they’re hoping that headbangers in ideological coating will serve them better.

Whatever the motives, there is a disturbing lack of interest from politicians and the authorities in highly questionable activities by certain neo-Nazi formations, especially in the Crimea, and possibly now coming to Kyiv.

Crimean journalists report that a group of neo-Nazis is holding military training sessions in Kerch.  They call themselves the Kerch branch of the Russian chauvinist and rightwing movement Russian National Unity. These are no innocent games: photos posted on social networks show the “fighters”, whose faces are all obscured, throwing Molotov cocktails, as well as fighting with the use of knives.  On one photo they are using the Nazi Sieg Heil salute.

Volodymyr Prytula, Head of the Committee for Monitoring Press Freedom in the Crimea, notes that despite lively media interest over the last weeks, there has been no response at all from the authorities, or from the two recently-created “anti-fascist” committees in Kerch, one linked with the Party of the Regions, the other with the Communist Party.  The press services of the Crimean Cabinet of Ministers and Parliament claim that they haven’t seen any reports.  The Crimean Police and Security Service [SBU] have proved equally unobservant, despite the Nazi symbolism, the open link to a group preaching Russian supremacy and a formidable arsenal of weapons and fighting techniques. The motives for such overtly blinkered vision are unclear.

The law enforcement bodies are looking elsewhere when it comes to other dubious activities directly linked with the above-mentioned Maxim Martsinkevich.  The latter, known widely as Tesak, first gained notoriety as a skinhead and the leader of Format 18 (1 stands for A; 8 for H – Hitler’s initials).  The organization was responsible for a number of shocking video clips preaching hatred against Asian migrant workers, people living on the streets, members of the Antifa (antifascist) movement.  One video, showing an “execution” in a Moscow region forest, is believed to have been based on a real killing.  Martsinkevich has been sentenced twice on incitement to racial enmity charges and spent 3 years in prison. He was also arrested in February this year in Minsk (Belarus) and charged with hooliganism linked with provoking a fight with antifascists.  According to the media reports in February, he could face a prison sentence in Belarus making it even less clear how he can be free to hold a seminar on 28 July at the Kozatsky Hotel in Kyiv.

In fact, Martsinkevich and his cronies have found a new activity which is presently being pushed in Kerch, Yalta and Sevastopol, after seemingly finding followers in up to 80 Russian cities.  The movement called “Okkupai-pedofilyai” is supposedly aimed at fighting paedophile behaviour.   The tactics involve using young girls or boys as “bait” in order to entice paedophiles to identify themselves on the Internet.  The movement’s members then use various means, almost certainly linked with physical violence and humiliation, to make the latter “repent” and denounce their ways.  It is undoubtedly worrying that such “baits” have found plenty of men eager for sex even when they learn that the person they believe they’re talking to is only 14.  On the other hand, the behaviour in question and the uses of child pornography are criminal offences which the law enforcement bodies are obliged to respond to.  The latter are clearly failing to protect young people by not doing so, but are helping nobody when they turn a blind eye to the activities of these neo-Nazi vigilantes whose methods are as questionable, as their Nazi leanings.  Those who see recent homophobic murders and horrific crimes committed by skinheads in Russia over recent years as unrelated, and the methods described here for dissuading potential paedophiles as innocent, should note the experience of one Kerch journalist.  Iryna Sedova from the website Kerch.fm received messages with threats to her life after publishing an article entitled “Who has taught Kerch adolescents to take the law into their own hands and why?”.  The author clearly outlines the neo-Nazi side to the movement and spells out that “Martsinkevich puts his credo as follows: “Any of my projects are propaganda of Nazism, even if I don’t give the Nazi salute in this picture”.

In June this year two far-right US bloggers who set up Stop Islamization of America,  were refused entry to the United Kingdom on the grounds their presence would "not be conducive to the public good".  Failure by Ukraine’s authorities to respond adequately to organizations and individuals with clear neo-Nazi roots, methods and ideology is against the public good and gives the lie to the ruling party’s rhetoric.  Selective anti-fascism has as much to do with real opposition to fascism as selective justice to the rule of law.