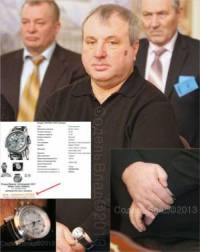 Viacheslav Ovcharenko has been elected head of the Constitutional Court.  Ukrainska Pravda reports that Ovcharenko made his career swiftly thanks to Viktor Yanukovych.  He became a Constitutional Judge in 2006.  Before that, from October 2001, Ovcharenko worked as a judge of the Yenakiyevo City Court.  In December 2002, a month after Yanukovych was appointed Prime Minister, Ovcharenko became the head of the same Yenakiyevo City Court from where the material about Yanukovych’s convictions disappeared without trace.

Ukrainska Pravda cites its own investigation

His predecessor as head of the Court passed him the act confirming receipt of all criminal and civil cases underway, as well as those kept in the court’s archives.  The ruling refusing to initiating a criminal investigation against staff of the court asserts that according to Ovcharenko’s testimony, the cases connected with Yanukovych’s convictions were missing.

“In his testimony Ovcharenko explains the disappearance of the documents as linked to the fact that from 1989 to 2000 the Yenakiyevo City Court did not have proper security.”