Berkut riot police disperse peaceful protest on Independence SquareMore Clashes with police and protesters’ versions differing radicallyVradiyivka: Rule of Force rather than Rule of LawSecond police officer detained in connection with brutal Vradiyivka rapeVradiyivka residents storm police station after rape of young womanPolice officer gets long sentence for raping detaineePolice officers accused of torturing a detainee still at workSix former police officers sentenced over the killing of a detaineeNine prosecutions over the death of a detainee passed to the courtProsecutions over the death of a detainee in PrylukyHead of a Regional Department for Fighting Organized Crime dismissed over the death of a detaineeFirst suspects identified over the death of a man detained in custodyDetained man dies under suspicious circumstances in police custodySo who is defending us?Police under Scrutiny activist attacked – police under suspicionBelarus KGB arrest journalist who identified the Ukrainian Berkut helping Lukashenka regime Will anyone answer for the killings on Maidan?No end to Russia’s revenge for Ukraine’s Revolution of DignityUkraine takes vital step towards trial in absentia of suspected Maidan mass killersFrom lawyer for pro-Russia Medvedchuk party to running Maidan cases. Disturbing new top appointment in Ukraine
• Topics / Freedom of peaceful assembly
• Topics / Law enforcement agencies 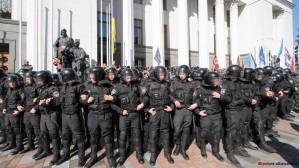 The Interior Ministry Special Force Berkut was mainly created to fight dangerous criminals. In fact, however, its main task is increasingly becoming what is euphemistically referred to as protecting public order at protests.

There are a number of such special force units – Alpha, Omega; Sokil; Berkut; Titan.  Over the last few years it is increasingly Berkut which shocks the public through its aggressive treatment of peaceful protesters,

Mykola Khavronyuk from the Centre for Legal and Political Reform says that such special forces as Berkut are part of a country’s arsenal, however the law should specify the number of officers; their tasks and strictly define the means used for achieving them.  The law needs to spell out their powers and duties and, most importantly, what they may not do.

The Berkut force was created in 1992 as a swift response force for fighting organized crime. Since then its activities have only been set out in Interior Ministry normative acts.  This means that the legal mechanisms for their activities lie solely with the Interior Ministry management who are changed according to political changes in the country.

There are presently around 4 thousand Berkut officers.  There are 4 applicants for each successful candidate, which is not surprising with a salary which is 1.5 to 2 times higher than the norm for police officers.

The force now includes not just physically hardened officers, but specialists on special technical means; mountain-climbers; snipers and others. They’re used to detained armed criminals, members of criminal gangs and free hostages.  Over the last 7 months Berkut officers have taken part in 160 such operations.

The officers also undergo psychological training. One of the officers, on condition of confidentiality, told Deutsche Welle that the main purpose of this training is to instil the attitude that all tasks must be carried out.

Yet just a few years ago Berkut’s role in countering crime was considerably more productive. In 2005, with a force size of 3 and a half thousand officers, over 18 thousand operations were carried out; in 2006 21.5 thousand operations, if the media reports citing the then Interior Minister are to be believed.

In response to a formal information request, the Interior Ministry informed DW that these days one of Berkut’s main tasks is “to ensure law and order during national; high-profile; socio-political; sports, shows, cultural, religious and special events”

“Therefore officers of these units are deployed mainly to guard public order during events involving large numbers of people”.

Human rights worker Oleh Martynenko calls this situation the result of incorrect management and political pressure and says that as a consequence professional special force officers are working in a non-professional capacity and in non-professional conditions. Martynenko was until recently the sole representative of a human rights organization on the Public Council attached to the Interior Minister. However the Ukrainian Helsinki Human Rights Union recalled him, stating that they saw no interest from the Council in resolving human rights problems.

According to Interior Ministry normative documents, it is actually the regional heads of the Interior Minister who are responsible for providing people and means for ensuring public order. However Mykola Khavronyuk points out that the Interior Ministry’s documents do not answer fundamental questions, like what anti-public manifestations are, and how stopping mass disturbances differs from crushing them.  What in fact is a large-scale event, how many people are involved?

Oleh Martynenko notes that during thousand-strong protests by the opposition, no more than 100 Berkut officers may be provided to protect their safety, yet during peaceful demonstrations, like the Vradiyivka Procession to Kyiv, there can be virtually the same number of Berkut officers on the streets, in buses and underground passages as demonstrators.

“It’s essentially the political leadership that rules on which protests to be removed, liquidated, neutralized, and the unit commander calls maybe the entire unit to the place of the event.”, Oleh Martynenko says.

From a Deutsche Welle report