Judicial reform by most other names 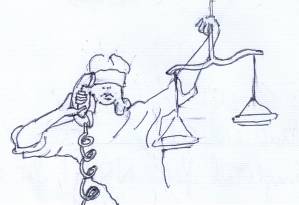 Government officials and the heads of specialized courts are claiming that the judicial changes which President Yanukovych initiated soon after coming to power in 2010 simplify and accelerate examination of cases. This view is not shared by former judges working up to the “judicial reform”, human rights groups or international organizations.

As reported here, public opinion surveys show that public trust in the judiciary is at an all time low.

Statistics do however indicate that the number of cases awaiting examination has become to fall. Since the beginning of the year the High Administrative Court has registered almost 35 thousand cassation or initial appeals, as well as law suits. However during this same period the 83 judges of that court have examined

The Deputy Head of the High Administrative Court, Dmytro Lipsky asserts that this is evidence of more efficient work by the Court.  He says that since the first quarter of last year the Court has been examining more cases than come in.

The judicial reforms undertaken in 2010 introduced a number of high specialized courts, and reduced the power of the Supreme Court.   Those close to the present regime claim success.  Concern was expressed from the outset by civic organizations in Ukraine, the Venice Commission of the Council of Europe, the Parliamentary Assembly of the Council of Europe, and many others. According to the last survey carried out by the Razumkov Institute and Democratic Initiatives Foundation, barely 3% of Ukrainians totally trust the courts.

Apparently Ukraine is now in first place for the number of applications to the European Court of Human Rights.

According to Ihor Koliushko, Director of the Institute for Political and Legal Reform, you can’t claim that judicial reforms have been successful if confidence in judges’ verdicts has fallen to a record low, and these verdicts are found to be questionable and effectively rejected by international courts.

“Judging by the situation over recent months in Ukraine’s judicial system, there are no grounds for talking about any positive moves. When we have dozens of wrongful court orders banning peaceful assembly, dozens of sentences against political opponents, when criminal cases are initiated and then the courts simply stamp verdicts, what sort of success is that”

Koliushko sees the biggest problems arising from the judicial reforms as being the loss of powers of the Supreme Court and the increasing decree to which the justice system has become dependent on other branches of power.