Ukrainian Mines becoming even more dangerousIllegal mine resumes work after fatal accident and police look the other wayOrganizer of illegal mine imprisonedMore victims of Donbas’ illegal minesDonbas Miners: Neither decent working conditions, nor a normal burialBlack Gold mixed with BloodYet more miners die in Ukraine’s minesUkraine’s Mines remain deadlyMiner who complained of inhuman conditions after mine disaster “transferred”Ukraine’s Miners: Put at Risk and ExploitedAnother methane explosion at a Luhansk region mineNo End to the Deaths in Ukraine’s Mining DisastersUnion blames Mine Owners for Fatal BlastRefined torment of minersReformers of the Mining Industry – Miners’ Opinion not needed?On illegal mines in the Donbass region and where the Police and other authorities are not lookingWere miners left to die after the explosion at the “Zakhidna” Mine?Akhmetov’s miners go on strikeMiners protesting over pay arrears arrested and tortured in Russian-controlled Luhansk ‘republic’Donbas ‘republic’ journalists trained in propaganda skills in Russia
• Topics / Social and economic rights

Miners forced to begin major protest – for their wages 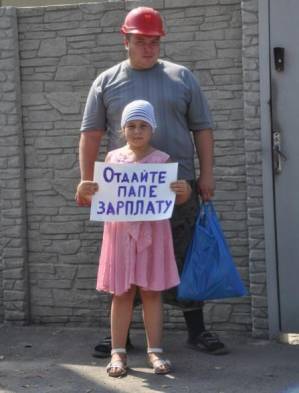 Give my Dad his pay!

Miners from Pervomaisk in the Luhansk oblast on 21 August began a protest march, initially to Luhansk, under the banner “Donbas, Rise from your knees!”

Serhiy Kovalenko, head of the civic organization “Luhantsy” [People from Luhansk] says that people are angry in the first instance over wage arrears. At the present time miners are owned 8 million UAH.  The debtor is Inter-Invest Coal, a private company which is renting one of the local state mines.

The protesters are demanding full payment of their wages; merger of the mine with the State-owned Pervomaiskugol [Pervomaisk Coal]; investigation into alleged theft of state property at Pervomaiskgruzotrans and Pervomaiskugol; as well as punishment of the officials from the Prosecutor’s Office and city police who they say have caused the present escalation of the situation through their failure to act.

The miners say that attempts at dialogue with the management of Inter-Invest Coal have been futile. Two days ago miners threatened to storm the Mayor’s Office if Mayor Babiy didn’t talk to them.  He eventually did appear but only, in their words, to give yet more excuses, .

The miners are planning to walk the considerable distance between major cities in the oblast.  A major demonstration is planned in Luhansk on 24-25 August.  After this they hope to march through cities in the Donetsk; Kharkiv; and Dnipropetrovsk ;oblasts. They hope in this way to attract the attention of the authorities and public, and that this will help to resolve the problem.

From information at Ostro