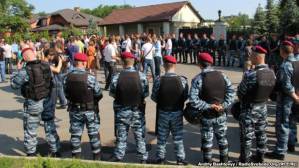 There have been further measures aimed at preventing Ukrainians from viewing a documentary about Yanukovych’s controversial residence at Mezhyhirya.  Since the short film is part of a medley of film strips entitled “Open Access”, and “Mezhyhirya” is about thwarted attempts by journalist Serhiy Leshchenko to obtain information of undoubted public importance, the message could not be clearer.

In Brovary (Kyiv oblast) on Sept. 25, five minutes into the film, the electricity went out.  That was restored, and then the Ministry of Emergencies sent people supposedly to look for a bomb.

In Kyiv on Sept. 27 other methods were used to disrupt the showing of Open Access.  The first two rows of the cinema Kinopanorama were taken by people who looked like down-and-outs and were obviously not sober.  They smoked, let off smoke bombs and shouted that there’d be no viewing. They had home-made badges hanging around their necks with the words “Maidan” “correspondent”.

As reported here, these are not the first such attempts to prevent people seeing “Open Access” (see for example,   Even film about Mezhyhirya scares the authorities).

The documentary is made up of 5 video features on Mezhyhirya; Afghanistan war veterans; “School”; and two others and addresses problems arising in implementation of the Public Information Act.

As reported here, any attempts to hold peaceful gatherings near the entrance to the vast estate at Mezhyhirya have been thwarted by court bans, as well as by guards who appear official, but have nothing on to identify them.

See Protecting the President’s Patch for information about the excessive measures taken against Democratic Alliance activists.  They had arrived together with TVi journalists to observe how the “spring flood clean up” cited as excuse for banning their planned demonstration was getting on and to offer their assistance.

No assistance was required since there was no flood.

However four activists ended up being detained.  One was jailed for 7 days, and another then jailed for 5 when he went to the court to protest his colleague’s sentence.

Later in May the peaceful assembly watchdog OZON, set up by the Centre for Civil Liberties, demanded that the Interior Ministry explain who the identified men in black were who had obstructed a peaceful gathering near Mezhyhirya on 15 April.

OZON said that their representatives had been present at a peaceful gathering in defence of freedom of peaceful assembly organized  by the Democratic Alliance party and its youth branch in the village of Novi Petrivtsi near Mezhyhirya.  They had been confronted by a group of individuals in black uniform with bullet-proof vests, rubber batons, walkie-talkies and other special devices, yet without anything to indicate who they were. They were obviously working closely with the police including the Berkut riot police. OZON pointed out that the use of unidentified individuals in this way is a grave breach of the Law on the Police and of international standards.

These men in black pushed the demonstrators from the place where they began their protest, creating a circle around some of the protesters and detained one of them.

They refused to identify themselves when asked both by the demonstrators and by OZON.

The Kyiv Regional Police later told the Centre for Civil Liberties that they didn’t know who the men were.