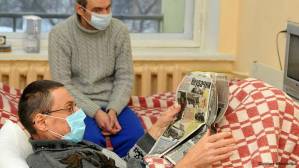 In Kharkiv the only unit for patients with a severe form of tuberculosis has been closed for repairs.  The Kharkiv Human Rights Group warns that there will soon be no anti-tuberculosis units left.

The unit for patients with the most dangerous – multi-resistant – form of tuberculosis has been closed now for two weeks.  The Health Ministry Order gave only five days in which to move the 50 patients of the unit to other anti-tuberculosis units. 30 patients have signed an appeal to the regional authorities asking for the repairs to be stopped, and for them to be allowed to remain where they are.  One patient, who wished to remain unnamed, explained to Deutsche Welle that they were pushed out and offered places in other hospitals.  There’s no sense, he says, since the conditions in other hospitals are much worse.

Aigul Mukanova, KHPG lawyer, calls the transfer of patients from a specialized unit to one less specialised a direct infringement of the constitutional right to decent medical care.

Anna Moskalenko who heads a Kharkiv NGO for protecting patients’ rights believes that the transfer is in breach of the Healthcare Act.  She points out that nobody discussed the move with the patients and the decision was taken unilaterally, although each patient has the right to choose the hospital they’re treated in.

She also mentions the likely danger to other patients, suffering from less severe forms of tuberculosis if patients with multi-resistant tuberculosis are placed in the same wards with them.

KHPG reports that over the last 5 years due to restructuring and money-saving measures, 5 anti-tuberculosis units have been closed. Each was supposedly closed “for repairs” but never opened again. Although this is denied by the authorities, human rights groups believe that the same could happen with the present unit.

Some of the patients have refused to move to other units and plan to visit a daily outpatients’ unit, meaning that they will be coming into contact with people not infected with the disease everyday.

The above-mentioned appeal was also signed by some of the staff of the unit being “closed for repairs”.  One nurse stressed that the authorities need to confront the fact that the number of people suffering from a serious form of tuberculosis is on the increase. They need to open new units, not close existing facilities, otherwise, she says, “this is a crime against society”.