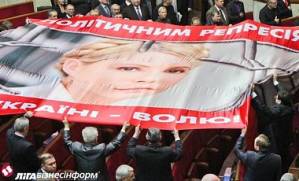 Iryna Shevchenko reports that Thursday’s working group meeting showed that the issue of prisoners’ treatment abroad does not depend in any way on the Verkhovna Rada.  Everybody is simply awaiting a decision from the President’s Administration.

In the meantime, on a visit to Zaporizhya Viktor Yanukovych repeated the line already heard about his willingness to sign any law on Tymoshenko adopted by parliament.  He told journalists that he had held what he called “a large number of consultations” and the “general position” was that the relevant draft law should concern all Ukrainian nationals, not only the former prime minister.  This he said was because “everybody is equal before the law, and rule of law is most important”.

After the abortive parliamentary session on Nov. 13, European Parliament envoys Pat Cox and Alexander Kwaśniewski, who had been present in parliament, stated that laws on treatment of Ukrainian prisoners abroad, on the public prosecutor and on the elections must be passed no later than Tuesday, Nov. 19.

Of the 13 members of the working group, four did not turn up at all on Thursday (one each from the Party of the Regions, VO Svoboda, the Communists and one non-affiliated MP).

After the proposal by Vitaliy Zhuravsky to break until Monday because he had “an important meeting” was dismissed by opposition members of the committee, the absence of some members was used instead.  The next meeting is now scheduled for 16.00 on Monday, Nov. 18.  The EP Mission gives Tuesday as the deadline for the laws to be passed.