“The government has made its choice, now it’s our turn” 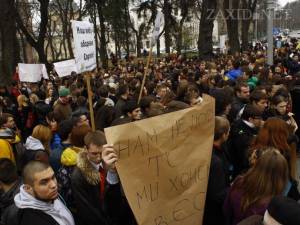 The Lviv Maidan coordination committee has announced that the protest near the Monument to Taras Shevchenko will be ongoing.  The thousands who have gathered in protest at the government’s decision to suspend the European integration process plan to remain there through the night.

Zaxid.net. which is broadcasting direct from the protest, reports that signatures are also being gathered under a letter to Viktor Yanukovych calling on him to continue Ukraine’s move in the direction of European integration.

The coordination committee has issued a statement calling on people to mobilize during the next three days in preparation for a general strike from 25-29 November with the demand that Ukraine sign the EU-Ukraine Association Agreement.

The photo above is of a protest initiated by students under the banner: “The government has made its choice, now it’s our turn”,   Over two thousand students gathered and marched in process from the Lviv Regional Administration to the Ivan Franko National University in the centre of Lviv.